Anime Review: The Place Promised in Our Early Days 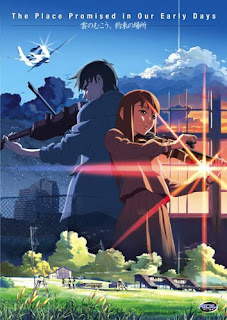 Last year I served as the resident audio expert here on The Update. With some of the things I've got lined up for this year I'm probably going to wind up as the resident anime correspondent. Though I haven't completely abandoned audio works. Anyway, today we are going to take a look at an anime movie. We're reviewing The Place Promised in Our Early Days.

It's set in a world where the Soviet Union has occupied almost all of the island of Hokkaido since 1973. The Soviet began construction on a mysterious tower after they secured Hokkaido, while the rest of Japan is backed by the United States. The movie follows three characters named Hiroki, Takuya and Sayuri. The three initially meet as teenagers and make a promise that one day they will fly to the mysterious tower. The movie then skips ahead three years as tensions grow high between the United States and the Soviet Union.

Takuya is a physicist who is working with the United Nations on a project to contact other universes. Hiroki is a student in Tokyo and has been greatly effected by Sayuri's disappearance and is doing everything he can to find her. Meanwhile, Sayuri has slipped into a coma and is being monitored for possible psychic abilities. As the world draws closer to World War III could she be the key that ties everything together?

Now that sounds like a pretty good set up with lots of alternate history possibilities. Well, we'll talk about that in a minute. For now let's talk about the alternate history itself. Unless the Soviet Union was feeling suicidal, 1973 is way too late for them to nab Hokkaido. At best you might see them getting it in an alternate World War II outcome, but even that's kind of dicey given how small the Soviet Pacific fleet was. I suppose the film makers were trying to draw parallels to the partition of Korea. Also, the tower appears to stretch miles into the atmosphere and can be seen from Tokyo. The technology to build something like that didn't exist in the 1970s, or even in the present day for that matter.

The Soviet Union is shown to have survived to the present day though that was a bit more believable. Also, though it's never mentioned, I would assume that Korea is United under communist rule in this world.

Okay, now for the big one. You know all of that alternate history I just told you about within the setting? Well it's not really the main focus of the plot. Don't get me wrong, it does factor into the plot and is involved with moving the the story forward, but it isn't front and center like in something like Code Geass. Also, you only find our certain details of the setting if you read the back of the box the DVD comes in. The primary focus of the plot is on Hiroki and Sayuri's relationship. So how does it do in that regard?

I'd say, all things considered, reasonably well. Their relationship builds slowly and steadily. There's no grand deceleration of love or love at first sight. It all feels very genuine and sincere. They, as well as Takuya, are just average people trying to live their lives even as the world inches closer to conflict. I guess that's kind of how history works for the average person on the street. There are events going on around us that shape the world we live in, and will live in, but we all go on with out lives as best as we can.

I'd also like to take a minute to talk about the soundtrack. It's filled with lots of classical music and violin pieces. It is beautiful, elegant and adds a lot of emotional depth to the movie. The artwork, especially the scenery and flying scenes, is quite good as well. It's very reminiscent of the film's of Hayao Miyazaki and there are a few instances that feel like visual references to those films. The voice acting, and here I'm referring to the English dub, was also quite excellent.

All things considered, I quite enjoyed this movie and I think you will too. It's beautiful, elegant and heartfelt. However, if you're going into it primarily for the alternate history aspect you might be a bit disappointed, so just be aware of that.