Sorry for not posting a Weekly Update this week. My wife and I hosted Easter for her family at our house and I just did not have the time to string something together. I didn't, however, want to miss another Map Monday and I think you are going to like what I found for you today: 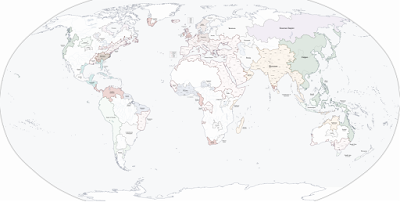 The above is "Imperio Terra" (full sized version here) and it is a collaboration between the always talented Rebecca "Upvoteanthology" Stirling and the awesomely named AnachronistRocketeer. This had been submitted to MotF 133: And Then There Were Few which required a map with the least nations as realistically possible. They must have done a good job because they actually won the contest by just one vote.

The map is good and certainly less cliched then another map of Rebecca's I featured last week (although I think the cliches were intentional). It has the light colors that she is known for and the place names are not anachronistic. It is just an all-around great map that doesn't fall into a lot of the same traps other Rome never falls timelines do.

Honorable mentions this week go out to "Democratic People's Republic of Japan" by PizzaMolecule, Bruce Munro's cover of Goliath-Maps' "Jefferson territory in the Oligocene" (description here), "The Partition of British India - 1950" by Zrew33, "Terrestrial Domains, Provinces and Protectorates of The Solar Empire" by Serafim and "Decision Time: Japan" by Krall.

Phew...what a lot of honorable mentions. Lets finish this Map Monday with a look at Mexico's proposed route for Trump's wall.