An alternate vexillologist whose work I have always enjoyed is Hellerick. You can check out a gallery of his maps and flags here on the AltHistory Wiki, but today I wanted to draw attention to a flag of his that was posted on Reddit the other day: 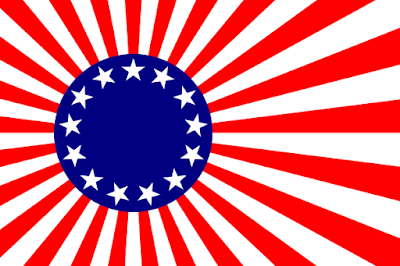 This is the "US Imperial Naval Ensign" and obviously it draws inspiration from the Rising Sun Flag. There are some changes, of course. The red circle in the center has been replaced by a blue circle with the 13 stars symbolizing the original 13 colonies. Meanwhile, the Rising Sun Flag has 16 rays, but this one has 50, which I guess is for the current 50 states and that would mean this flag went through a lot of revisions in its timeline.

The flag actually has kind of a hypnotic power. Try staring at the blue circle for a while and tell me if you agree.

Hellerick didn't provide a history for this flag, but I like to think the point of divergence happened when the Japanese refused to negotiate with Commodore Perry and war ensued. American firepower wins the day and Japan becomes an American colony. The United States gets a taste for imperialism, the Civil War is butterflied away somehow, Japanese culture becomes popular stateside and the American Empire is eventually established (probably with the help of alien space bats). By the present day in this timeline, the ships in the massive American fleet flies this flag when they circle the globe to remind the rest of the world who is boss.