Today's featured map comes from a unique source (Vivid Maps) and is probably more "hypothetical scenario" than alternate history. It is titled "Twenty-Eight Equally Sized European Union Member States" and was created by an Alasdair Gunn. Check it out below: 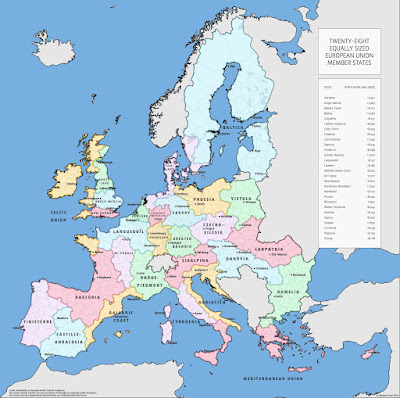 At first I didn't know who the author was because Vivid Maps didn't have much info on the map itself, but thankfully the always excellent Strange Maps had published an earlier piece on this map. I could say a lot about this map, but Frank Jacobs of Strange Maps has already said a lot so I recommend you go check out his article (or buy his book).

That being said, I can still point that this map is not meant to be taken as a serious proposal for creating some sort of centralized European Union. I find it hard to believe that any of the European states would agree to such divisions. Still its another way of looking at the EU and it is fun to see some names that haven't existed for sometime...but why "Northland"? Perfect opportunity to call the place Northumbria and you completely blew it Alasdair!