I now present to you my interview with Geoffrey Wilson, author of Land of Hope and Glory.  Enjoy:

I was born in South Africa and grew up in New Zealand, but now I live in the United Kingdom. I’ve been writing stories since I was a child and I’ve always wanted to be a writer.

I’ve also been interested in Indian history and culture for a long time and studied Indian religions at university.

Do you write full-time or do you do something else for a living?

At the moment I’m lucky enough to be able to write full-time, but once I’ve finished the third book in the series I’ll have to evaluate the situation. I used to work as a technical writer and so I will most probably need to go back to that at least for a while.

Basically, through reading about real history. I like historical fiction and non-fiction, but as I read I often find myself thinking “what if things were another way?” or “what if this had happened instead?”. My brain just seems to work that way.

What is Land of Hope and Glory about? 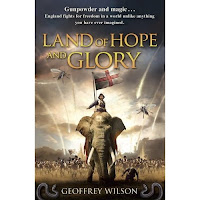 How large is the Rajthana Empire?

It’s similar in size to the 19th-century British Empire in our timeline. So, it’s a global empire that takes in parts of the Middle East, Africa, most of Europe and bits of the Americas.

Does the Rajthana Empire have any real competitors?  Is there a "Great Game" going on somewhere?

The Rajthanans’ key competitors are the Sikhs, who have their own global empire. There is very much a “Great Game” going on between the two empires in Europe. There is more about this in book 2 and there will be much more in book 3. Obviously, the Sikhs are keen to help the English rebellion and exploit the uprising for their own purposes.

Other Indian nations are also rivals to different degrees. The Bengali Empire was an early competitor to the Rajthanans, but this is in decline by 1852.

I should probably tidy up my notes and publish the full timeline one day.

What inspired you to write the novel?

Most of the inspiration came from reading about Indian history, especially the 1857 uprising. I started to wonder what it would have been like if things had been reversed in the 19th century. Once I began thinking about that, the world of Land of Hope and Glory sort of popped into my head. Then I just had to get it down on paper (or at least into the computer).

Land of Hope and Glory is the name of a well-known British patriotic song. The idea of using it for the title of the book came to me almost immediately after I had the initial idea for the story. It just seemed right and I stuck with it.

The artist Angelo Rinaldi did the artwork, which I find very striking. The designers at Hodder & Stoughton took the artwork and created the cover design.

Are there any sequels planned?

After the three books, who knows?

When will Land of Hope and Glory be released as an e-book in the US?

There isn’t yet a release date for the e-book in the US, but I’m hoping it will be soon. I will post news about this on my website when I know more.

No, writing these books has practically consumed my whole life. My friends and family have been amazingly understanding about this.

I’ve just started Zulu Hart by Saul David. It’s historical fiction rather than alternate history. It’s about a 19th-century soldier who is part British and part Zulu. Saul David is an excellent historian who writes some fiction these days as well.

Do you have advice for would be authors?

To be honest, I still think of myself as a would-be author. But, for what it’s worth, my advice is as follows:

It’s a cliché, but persistence, I think, is key. It was for me, at any rate. I wrote three novels before I got some interest from publishers with Land of Hope and Glory.

You also need to keep on learning the craft of writing fiction. Never stop learning
Posted by Mitro at 11:00 AM

Email ThisBlogThis!Share to TwitterShare to FacebookShare to Pinterest
Labels: Geoffrey Wilson, Interview, Land of Hope and Glory, The Place of Dead Kings