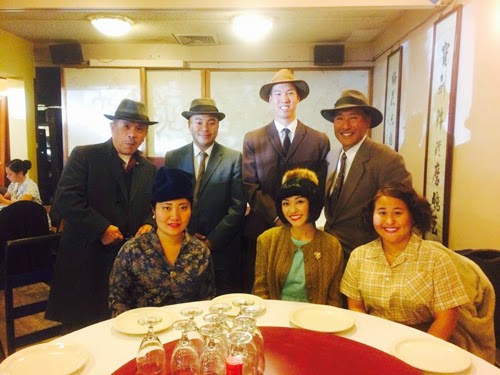 Those who regularly follow The Update probably know I have been less than thrilled by the announcement of Amazon TV's adaptation of Dick's The Man in the High Castle. I make no apologies about my concern. Some hold The Man in the High Castle as the book that kickstarted the modern alternate history genre, taking it out of its pulpy sci-fi status and maturing it into its own sub-genre more akin to historical fiction. Nevertheless, aesthetic choices and divergences from the book's plot made me anxious that the producers of the show were taking the story in the wrong direction. Now, however, I feel a little better.

The first assurance came from this article in The Columbian. In this article a Jay Greene discusses the staggering amounts of money Amazon is spending on original and controversial content. I found the quote Roy Price, the vice president who runs Amazon Studios, to be particularly enlightening: "We're not trying to be meek. We're trying to be interesting." Good, glad to hear that Roy. With all sincerity, I want producers to take chances on risky ventures. Sure you can make money by playing it safe, but taking risks is where the real wealth is to be found, both for the producers and the fans.

The second assurance came from another article, this time from an editorial in Northwest Asian Weekly. It was written by Johnny Pak, an actor who worked as an extra on the pilot. Pak's closing statement summed exactly what he felt about his small role in The Man in the High Castle: "This was one of the most interesting experiences I've ever had. It’s not often that there’s a demand for Asian actors in Seattle for a production of this scale. To feel like being a part of history and meeting new friends, it made for a very special day."

Is Amazon making history? Perhaps it is too soon to tell. That being said, I feel optimistic about their chances. By next year we should find out whether or not Amazon created a adaptation worthy of this classic of alternate history literature.