Not much to say in this editorial. I am moving my updates on my alternate history fandom research paper to its own series of posts, so you have that to look forward to later this week. Finished the Truman biography so now I am moving on to a new book. Not sure if it will be an alternate history, but probably.

More on Amazon TV's The Man in the High Castle 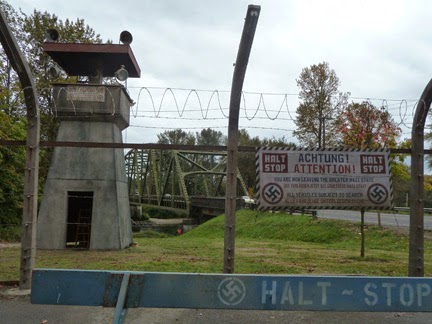 The Seattle Times reported that filming of The Man in the High Castle pilot has wrapped. Among the many locations filmed throughout Washington (O crap, it might look like Twilight), scenes were shot at the Paramount Theatre that were reportedly "intended to resemble New York’s Times Square in the 1960s." So we may not only see the Japanese occupied West Coast, but also the Nazi occupied East Coast. This was confirmed when The Woodinville Weekly reported that there is a Nazi watchtower and a “Missouri Autobahn Patrol” vehicle outside Monroe, WA.

So far a date has not been set for the premier of the pilot. We will continue to keep you informed as we get more details. In the meantime, check out these pics of the flag of the Pacific States of America.

This week in videos we begin with a Halloween themed episode from History Respawned, who discuss the Christian and Pagan symbolism from Diablo III:
Speaking of symbolism, did you know Legend of Zelda: Majora's Mask is heavily influenced by African culture? Culture Shock of The Game Theorists channel highlights the design choices for the bosses in the game in the first of a three part series:
And finally, just in case you weren't paying attention to what was happening in Scotland last month, here is a summary of the momentous (yet anti-climatic) decision:

What If Famous Crossovers Happened at Different Comic Book Companies? by Brian Cronin at CBR.

Alternate History: What If Kathryn Howard Had a Child With Henry VIII? by Alexandria Ingham at Wizzley.
Ann Romney: If Mitt had been elected president, ‘I do not believe there would have been an invasion in Ukraine’ by Bianna Golodryga at Yahoo News.
A Black Detective, an 1870 Trial and a What If by Jennifer Schuessler at The New York Times.
Censoring American History by Benjamin Dancer at The Humanist.
The Collectivization Counterfactual: Stephen Kotkin's New Stalin Biography at The Counterfactual History Review.
Dreaming a Different Apollo by David SF Portree at Wired.
The Hindenburg Wasn't The First Experimental Airship To Explode by Esther Inglis-Arkell at io9.
Report: Tom Brady Coulda Been a Jet by The Zookeeper at Gossip Gorilla.
What would a world without fossil fuels look like? by Michael Le Page New Scientist.

Is This Concept Art From The Teenage Mutant Ninja Alien-Turtle Movie?! by Rob Bricken at io9.
NBC Cancels Comedy 'Mission Control' Before Premiere (Exclusive) by Lesley Goldberg at The Hollywood Reporter.
Review: Doctor Who, S8, E8: Mummy on the Orient Express at Geek Syndicate.
Ten Things You Should Know About Dracula Untold by Genevieve Valentine.

Gail Carriger at Reddit.
AS King at Book Riot.
Anne Lyle at Skiffy and Fanty.

77 Telling History with Matt Mitrovich with Daniel Bensen at Kingdoms of Evil.