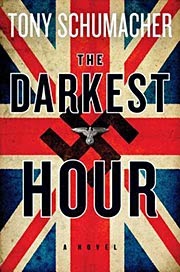 Tony Schumacher is sending me a review copy of his new book The Darkest Hour. Check out the description from Amazon:

A crackling, highly imaginative thriller debut in the vein of W.E.B. Griffin and Philip Kerr, set in German-occupied London at the close of World War II, in which a hardened British detective jeopardizes his own life to save an innocent soul and achieve the impossible—redemption.

London, 1946. The Nazis have conquered the British, and now occupy Great Britain, using brutality and fear to control its citizens. John Henry Rossett, a decorated British war hero and former police sergeant, has been reassigned to the Office of Jewish Affairs. He now answers to the SS, one of the most powerful and terrifying organizations in the Third Reich.

Rossett is a man accustomed to obeying commands, but he’s now assigned a job he did not ask for—and cannot refuse: rounding up Jews for deportation, including men and women he’s known his whole life. But they are not the only victims, for the war took Rossett’s wife and son, and shattered his own humanity.

Then he finds Jacob, a young Jewish child, hiding in an abandoned building, who touches something in Rossett that he thought was long dead.

Determined to save the innocent boy, Rossett takes him on the run, with the Nazis in pursuit. But they are not the only hunters following his trail. The Royalist Resistance and the Communists want him, too. Each faction has its own agenda, and Rossett will soon learn that none of them can be trusted . . . and all of them are deadly.

So say tuned for the review to be posted either here or at Amazing Stories.