World War II Was a Team Effort, Deal With It 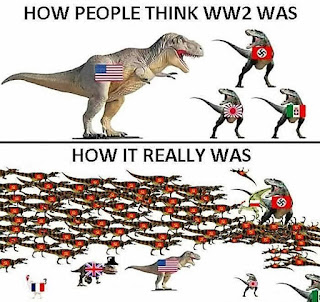 During the Cold War, with the emotions of that undeclared pseudo-war running high, with the German generals' self-serving memoirs available and the Soviet archives off-limits, the Brits and Americans over-emphasized their contribution to the war against the Germans and treated the massive Eastern Front battles as a side-show.

More recently, in some circles especially alternate history forums like AH.com. the over-emphasis has shifted in the opposite direction, to treating the Allied contributions as minor and of little consequence, with the Soviets capable of getting to the Rhine without the Western Allies and actually likely to do so in most circumstances.

The reality is that the Soviets and the Western Allies were probably both necessary to bring down the Germans and their efforts played off one another in often subtle ways. I won't comment on the more obvious connections, but concentrate on stuff that hasn't been discussed endlessly.

Even Holland, in its brief time in the war, had an impact on the future German invasion, inflicting high casualties on German airborne forces and more importantly, disrupting German pilot training. The Germans had a nasty habit of stripping their air school units of planes and the experienced pilots that were training the newbies when they launched major airborne operations. When those operations caused high casualties, as the airborne landings in Holland did--between 200 and 300 JU-52s destroyed, it took the Germans a while to get their pilot training back in gear, resulting in fewer pilots available eighteen months to two years later.

British intervention in the Balkans forced the Germans to send six panzer divisions, plus a motorized brigade that was being reequipped as a panzer division, aircraft and other assets in a very successful blitz. The Balkans didn't delay the start of Barbarossa as much as lot of people have claimed, but it did have a couple more subtle impacts. First, the two panzer divisions that covered the most distance in the Balkans didn't get back and refurbished in time for the Barbarossa kickoff. One of those division suffered heavy losses when their transport ships were sunk on the way back from Greece. Those two panzer divisions actually didn't get into the fight until October, though that was partly due to Hitler's decision to hold them back as the core of a force intended to fight Britain and the US.

Two more panzer divisions would have made some difference on the eastern front, but probably not a decisive difference. The Balkan invasion also had a more subtle impact on the Germans. It put a lot of miles on a lot of equipment that required maintenance after not too many miles. When the Germans overhauled their tanks and trucks and planes after the Balkan campaign, they ate into spare parts that had been intended for the invasion of the Soviet Union. It didn't take long after Barbarossa started before the Germans were feeling the shortage of spare parts, especially truck and tank engines.

Hitler made those shortages much worse in late summer 1941 by holding back new production tanks and tank engines to build up his forces for the coming battle with the US and Britain. He finally released some, but by no means all of the accumulated tanks and spare parts in October, for the attempt to capture Moscow.

Balkan invasion also drew down already inadequate German fuel stocks and munitions and ate up tires--always scarce in a Germany without natural rubber of its own and dependent on scarce and inferior synthetic rubber.

All of this may not have made a decisive difference on the Eastern front--German logistics were a mess even without lack of spare parts. The Germans took far too long to change over the Soviet railroads to a gauge German trains could run on, and captured far too few Russian trains and rolling stock to use the railroads effectively before they were changed over. But it did weaken the Germans in the crucial summer of 1941.

I've been discussing Allied contributions to helping the Soviets so far and you're probably wondering when the 'team effort" stuff is going to kick in. I'm doing this chronologically, and so far the Soviets aren't in the war at all, as a matter of fact, they're propping the Germans up economically, selling them grain and oil and transshipping rubber to them.

Oddly though, the Soviet Union was already helping the Allies in some subtle ways, mainly by keeping Japan distracted and off-balance. When the Soviets made their pact with Germany, they did not make a similar pact with Japan. As a matter of fact, they were already fighting a bitter border mini-war with the Japanese in Manchuria. The Soviets actually escalated that war after their pact with Germany, bringing in crack divisions and trucks from all over the Soviet Union and inflicting a crushing defeat on the Japanese.

The actual fighting on the Manchurian border ended in mid-September 1939, with the Japanese agreeing to humiliating terms. The Soviet Union and the Japanese remained tense rivals, though. The Soviets continued supplying the Chinese Nationalists with war material, advisers and even Soviet planes and pilots throughout the rest of 1939, 1940 and even well into 1941, helping keep the Nationalists in the war and helping tie down Japanese power.

With so much of Japanese power tied down in China, the Soviets had a decisive edge in terms of military power on the Manchurian border from 1939 until the well into Barbarossa, something that the Japanese were well aware of. The Soviet/Japanese tensions did ease with an agreement a few months before Barbarossa, but for a crucial eighteen months from September 1939 to roughly May 1941, the Japanese had to look over their shoulder at the Soviet Far East military when they chose their foreign adventures.

The Soviet presence may have been crucial in keeping Britain in the war after the Fall of France. After Dunkirk, the Brits could barely defend the home islands, much less their Far East colonies. Add a Japanese attack on Malaysia/Singapore and Hong Kong to the German preparations for Operation Sea Lion and looming Italian attacks in North Africa and an already over-stretched Britain, already short of cash to buy weapons and supplies, would have had a horrendous time staying in the war. If the Japanese overran the Malay rubber plantations in late summer 1940 instead of in early 1942, they would have knocked out a big source of British revenue and forced the Brits into an expensive quest to replace the rubber with synthetics. Until they could build synthetic rubber plants, which would take a couple years, British military production would suffer tremendously. World War II military production required huge amounts of rubber and the Japanese were in a position to grab over 90% of world production.

Historically, the US (and probably Britain) started stockpiling natural rubber as the Japanese threat became apparent and those stocks were large enough to carry the western powers through until the US synthetic rubber plants came online. But the stockpiling came with almost 18 months warning time before the Japanese attacked historically and the US synthetic rubber plants were built while the US was at war, with a huge national mobilization--where money was no object and any obstacles could be over-run by war time urgency.

A Japanese attack in the Far East in the summer of 1940 is a nightmare scenario, one of the few that even arguably gave the Axis a serious chance to grow into a major menace. The US simply wasn't ready to challenge Japan at that time and Britain didn't have the forces to make even a semi-credible defense in the Far East. It's not clear that the Japanese had the will or the logistics to do that kind of attack in the summer of 1940, but the presence of a hostile Soviet Union on the Manchurian border and Soviet aid to the Nationalist Chinese that helped keep them in play against the Japanese certainly made such a Japanese attack less likely.

If the German/Soviet pact had been followed by a similar Japanese/Soviet pact in the fall of 1939 and the Japanese had already started turning their attention to a southern option before the fall of France, things could have gotten much more ugly. I would still give the Allies better than even odds to win if the Germans still turned on the Soviet Union, but World War II would have probably been a much more close-run thing.

This is getting long and we haven't even gotten to Barbarossa yet, except in a minor, tangential way. I'll explore this concept more in future posts.