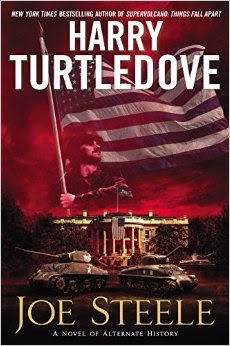 When I said I was going to review Harry Turtledove's Joe Steele (out on April 7), I never expected the reaction the news would receive. Alternate historians were really interested with this book. So I'm happy to announce that I have finished the novel and I am ready to reveal my thoughts on it.

A little background: Joe Steele is actually an expanded novel based on the short story of the same name. The story itself was inspired by a lyric from Janis Ian's "God & The FBI" that said "Stalin was a Democrat". Well Turtledove took that line and rolled with it when he created this alternate history. In this world, Stalin's parents immigrated to America shortly before he was born (along with the parents of several of his Soviet cronies coincidentally). Going by the name Joe Steele, he peruses a career in politics and manages to earn the Democratic nomination for president in 1932 after his challenger, Franklin D. Roosevelt, dies under mysterious circumstances. With vast amounts of popular support from Americans desperate to get out of the Great Depression, Steele sets about to reshape America into his own image, ignoring the Constitution and punishing anyone who gets in his way.

Steele's presidency, from his nomination to his death, is told from the point of view of two reporter brothers: Mike and Charlie Sullivan. Both react differently to the police state America is becoming. Charlie, for example, keeps his head down and rationalizes the extreme tactics Steele uses as being an unpleasant, but necessary burden if they have any chance of setting America right again. Mike, on the other hand, does not see any difference between Steele and other dictators like Hitler or Trotsky (who succeeded Lenin after his death in this timeline). Their choices set each brother down a different paths as Mike is thrown into a prison camp in Montana, while Charlie winds up as a speech writer for Steele himself. This style of story-telling means that Joe Steele does not have a plot per se. We essentially just see a slice of this alternate history from the view of these brothers, which is fine by me, but people who enjoy the more traditional story format may find this book wanting.

The plausibility of this alternate history is on the soft side. As Sam McDonald pointed out in his review of the short story, it is rather odd that the different experiences Stalin would live through growing up in America had zero effect on his personality, but then it wouldn't be an interesting story if Steele's entire political career revolved around him being a soft-spoken, but long-serving Congressman from California. Since this is a Turtledove novel, there is also a lot of paralleling going on through this history with Steele making some of the same choices that FDR made in OTL. In fact some of those moments made me a tad uncomfortable because it seemed as if Turtledove was comparing Stalin to FDR. While it has recently been in vogue to criticize FDR's presidency, even I think it is unfair to compare him to someone who is considered by many to be worse than Hitler.

Of course, I could just be reading too much into Joe Steele by bringing present-day politics into this review. You do get to see some major changes to history near the end of the book with Japan being divided between a communist north and capitalist south and a very odd omission of Israel which makes me think Steele was not as sympathetic to Zionism as Truman was in OTL (in fact several Jewish scientists are purged by Steele as traitors, so that could explain why no one seems interested in the Middle East). Without spoiling anything, I also feel that democracy and America are a lot worse off at the start of this alternate Cold War than in OTL. I would not be surprised if the United States actually loses in the long run if Turtledove ever decides to revisit this timeline.

Nitpicking aside, on the whole Joe Steele was an entertaining read. Turtledove took the Day of the Jackboot trope, which is often dominated by right-wing dictators, and gave us a Supreme Leader of the leftist variety. Although the book did drag in the middle, it still was a lot less flabbier than the novels in his many long-running series and the ending had a powerful emotional chord to it. Turtledove fans and people who enjoy dystopias will certainly want to pick up Joe Steele.