Absinthe and Arsenic by Raven Dane

In rural England, zombies attack a sleepy Yorkshire village … a Thames-side urchin falls foul of a vengeful spirit … a plot to mix arsenic and absinthe goes horribly wrong … ghostly spectres haunt the streets of gaslit London … and a clockmaker becomes obsessed with the passing of time. Welcome to the dark and fantastical world of Raven Dane, where a curse brings with it a fatal chill and an aging relative is a demon in disguise. 16 TALES OF VICTORIAN HORROR, STEAMPUNK ADVENTURES AND DARK, DEADLY, ONSESSION.

Breath of Iron: A Novel of the Clockwork Agents by Kate Cross

Sworn to protect England from all enemies, the Wardens of the Realm are ever vigilant. But not all battles are fought on a battlefield…sometimes they are fought in the heart.

As chief surgeon for the Wardens, Evelyn Stone fears her own life is on the line when she is kidnapped by a band of pirates—only to discover that the airship captain is Gavin “Mac” MacRae—her former lover. The man whose life she once saved. The man she abandoned.

Since Evelyn left, Mac made his mark as both a pirate and a pilot. But his true allegiance isn’t known. So when he asks Evie for help with a wounded woman onboard, he tells Evie that the woman is his wife—even if his feelings for Evie have never waned…

As the days pass, however, the unease between Evie and Mac gives way to the old comfort they used to have. Yet, their newly ignited romance is complicated by conflicting loyalties and desires, and a betrayal that may cost them both their love and their lives.

Pirates of the Timestream by Steve White

Pirates of the Caribbean meets times traveling heroes and godlike aliens. Sequel to Sunset of the Gods and Blood of Heroes.

Special operations officer Jason Thanou of the Temporal Regulatory Authority must once again plunge into Old Earth’s blood-drenched past to combat the plots of the Transhumanist underground to subvert that past and create a secret history leading up to the fulfillment of their mad dream of transforming humanity into a race of gods and monsters.

Jason and his companions travel to the seventeenth century to encounter the real pirates of the Caribbean—including a beautiful she-pirate who turns out to be Transhumanist renegade. To Jason’s horror, he also learns that the Teloi aliens who were the grim reality behind the pagan pantheons of antiquity—aliens Jason believed he’d successfully destroyed—are still active, and aiding the Transhumanists in founding an unspeakable cult. What’s more, these are a different—and far more dangerous—breed of Teloi than before.

Jason must somehow thwart the plans of the sinister allies while at the same time preventing reality itself from falling into chaos. In the end he finds himself venturing into space with a totally unexpected  ally: Henry Morgan.

The Vengeance of Rome: The Fourth Volume of the Colonel Pyat Quartet by Michael Moorcock

Michael Moorcock's most infamous antihero continues his epic and hilariously distasteful escapades in this fantastic fourth installment of the Pyat quartet. Picking up where Jerusalem Commands left off, bisexual, cocaine-loving, Jewish anti-Semite Pyat enthusiastically embraces Fascism and manages to insinuate himself into Mussolini’s inner circle. Sent by the fascist dictator on a secret mission to Munich, he becomes embroiled in Nazi Party intrigue and ultimately finds himself in the Dachau concentration camp. Thirty years later, having incredibly survived both Dachau and the Spanish Civil War, Pyat’s tale winds down as he recounts his adventures to a writer named Moorcock. From Pyat’s friendships with murderous dictators to his perverted sex acts with Nazi storm troopers, this book serves up a deliciously iconoclastic feast for fans of speculative fiction.

After dropping a devastating bomb on London Docklands, Doctor Tripps goes underground for twelve years while he formulates an evil plan to destroy diesel technology. With the help of a mermaid and a fly-monkey butler he devises a mysterious cocktail.

Meanwhile a young engineer, mistaken for his master and drawn into a mysterious, old and very secret society becomes an unlikely hero.

In London, the NANI agency sends out their newest recruit, Nanny Honey, to protect the children of the Russian Tsar.

As Tripps' Kaiju Cocktail is fed out into the world, weird and devastating mutations begin to occur that threaten the very fabric of society.

A NEOVICTORIAN WORLD WHERE STEAM IS PITTED AGAINST DIESEL ... WHICH SIDE WILL WIN?

The Mysterious Case of Mr. Strangeway by Karina Cooper 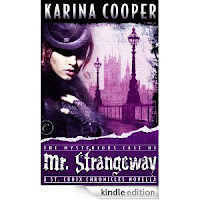 Although I have only been part of Society for two years, I am already desperate to escape its confines and eager for adventure. The world my deceased parents have left me is nothing more than a gilded prison, and I will do anything to escape the boredom, even become a collector of bounties.

My name is Cherry St. Croix, and I may be young, but I am old enough to know when I am in over my head. My first collection seemed easy: Mr. Strangeway's debts have come due, and the purse for his capture is hefty. Yet the wastrel remains one step ahead of me, and my efforts are hampered by another collector after the same coin. What's more, a simple hunt becomes the forefront of a conspiracy that leads me on a chase through London's low-class streets.

Not only does my pride demand success, but the well-being of many rests upon the choices I make—failure is not an outcome I can live with.

As a college student in Atlanta, Andrew Patel discovered Friedrich Nietzsche during a late-night study session. In the decade since, he has striven to live by the philosopher's principles, upgrading his body with cybernetics to transcend the merely human and using the local underworld as his scaffolding to join a more select race of beings. Life is good.

But the costumed hero Silverbolt threatens all this with his war against the gangs employing Patel’s expertise in merging man and machine. Cornered in a gang safe-house one night, Patel must fight to protect this threat to his lifestyle, but he may not be the only übermensch in Atlanta...

Superheroes get all the glory. Time to see things from a different point of view.