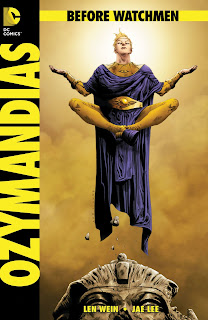 The story follows Adrian Veidt, aka Ozymandias, throughout his youth and coming of age, where he first begins to hone his brilliant mind and come to terms with his dreams of changing the world, and his rise as a billionaire businessman and innovator by day, and masked vigilante by night. Perhaps most important of all, we see him as he sets the seeds of his plans for world peace in motion, and with it, the events of Watchmen, and more than ever, get a glimpse into his thoughts and reasons for doing so, once again reminding us why the line over whether Ozymandias is a hero or villain all the more blurry.

Told in a brilliantly written first-person narrative by Len Wein, more than any other title, the writing sounds like it is from the voice of the title character, and is told in a way you may well believe it came from the thoughts of the world’s smartest man, as he wrestles with isolation, his plans and goals, and fleshes out the character brilliantly. Better still, is the art by Jae Lee, which thanks to its neo-classical look and almost whispy and fantastical look, is maybe the best looking title of the Before Watchmen line.

I said before that this is the best of the Before Watchmen titles, and I meant it. Though there were other good titles, and even a few that manages to meet the high standards set by Watchmen, Ozymandias alone left me wanting more, wishing that this was a regular series, and may be the only one that stands as a masterwork even without being tied to Watchmen. It comes with my highest recommendations, is undeniably a must read, one that practically begs you to look on this work, ye Mighty, and despair…