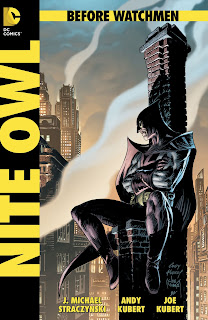 This was, in many ways, the kind of output people feared Before Watchmen as a whole would resemble. The story is at once, uninteresting, often repulsing, and barely tied to the Watchmen universe at all – worse, is it thinks that some swipes at religion and some sex and violence will make up for this.

As mentioned before, at least initially, the title followed Dan Dreiberg as he first takes up the mantle of Nite Owl, this quickly is set aside in favor of a caper where Nite Owl II and Rorschach hunt after a ripper who is killing prostitutes, a caper which is also set aside in favor of Dreiberg enjoying a tyst with a dominatrix masked vigilante called the Twilight Lady and Rorschach enjoys a brief affair with religion. It is then wrapped up and forcibly tied to a passing line from the original Watchmen, is if it felt the need to remind us we could be reading that instead.

Where do I even begin with what’s wrong with the writing? The story, in addition to being rather dull, is all over the place, and feels that controversy will make up for the lack of a true story. What sorts of controversy you ask? For starters, as much shoehorned nudity and sex as possible, especially regarding the frustratingly showcased relationship between Nite Owl II and the Twilight Lady – I’m no prude, but it was painful to read and look at, to say nothing of being in extremely poor tastes. Then we have a cheap swipe at organized religion that would make Richard Dawkins head to confession, in the form of a priest who is killing prostitutes under the ‘will of God’ – I literally had to force myself to keep reading at this point. Then you have the fact it uses child abuse, mentioned and shown in passing, in a failed effort at character development, and you start to get the idea of just how bad the title is.

The art, starts off well enough, until the death of Joe Kubert saw that the title was delayed and that the art would be done by his son Andy Kubert. Not that there is a serious decline, but you can tell the moment they swapped artists, and it further distracts in a title that can ill-afford more distractions.

The Nite Owl title offers the all-around worst of the worst in Before Watchmen – writing over reliant on shock and controversy that just comes across as a sort of lazy fanfiction, a story that not only is uninteresting and unenjoyable, but at times uncomfortable to read, and art that for the most part meanders on mediocre. To call it a lazy cash-in would be generous – this strikes me like a story taken from the worst offerings of the 1990s dark age of comics with a new title slapped onto it, and the end result completely dishonors the memory of both Nite Owl and Watchmen. The only reason you should even consider picking up this title is to see it destroyed – aside from that, stay as far away as possible.