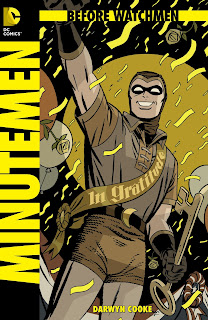 As mentioned before, a prequel covering the initial supergroup whose foundation set off all of the events of the Watchmen universe had been in talks for years, and had the opportunity to tell the tales of characters like Captain Metropolis and the original Nite Owl, as well as casting light on a corner of the canon Watchmen universe only given snippets of details in passing.

The title focuses on Hollis Mason, the original Nite Owl, getting ready to write Under the Hood, as he remembers his time as a masked vigilante, his various adventures with the Minutemen, and the rise and fall of both the group and its various members. We get to see some of the capers the group went on, some of the behind the scenes drama that faced the members of the team, and we watch as the world of masked vigilantes shifts from that of Nite Owl and Dollar Bill to one of Doctor Manhattan and Rorschach.

Let me start by saying that the story is fantastic – told from the perspective of Hollis Mason as he both begins writing Under The Hood and remembers the events of his time with the Minutemen and its various members via flashbacks, we get a look back at the group through events large and small up through the so called ‘Golden Age’ of the masked vigilantes. It certainly benefits from the fact Watchmen said so little about this group of heroes, yet the title wastes no time giving each of them personalities, back stories and identities that perfectly fit in with both the original spirit of Watchmen, and the sort of mental pictures I’m sure some of us had formed of the various superheroes from the team.

This is made all the better by the fantastic artwork that in many ways, showcases the very best kind of artwork the Golden Age of Comics had to offer. Darwyn Cooke, who did both the writing and the art, has earned a name for himself on new retro titles like The Spirit and The Rocketeer, and he brings that same infusion of Golden Age spirit to a title that manages to deconstruct that eras comics as much as it pays homage to them – all the while connecting it to the greater Watchmen universe, and fleshing out its most overlooked chapters.

This series grabbed me from the first issue, and save for Ozymandias, is the best of the Before Watchmen titles. It fleshes out the Minutemen and the greater universe of Watchmen, tells interesting stories while fleshing out a cast whose rise and fall we bear witness to, and is a joy to read and look at. A top notch title, and comes with my firmest recommendations – for those who loved the original Watchmen, Minutemen will very easily find a place next to it on your shelf.

Soldier, scholar, writer and web-voyeur, Sean CW Korsgaard has been active in the alternate history community since 2006, and was recently elected to succeed Mitro as President of the Alternate History Online Facebook group. In addition to his contributions at the Alternate History Weekly Update, he writes for several websites, including his own, which can be found here.
Posted by Mitro at 3:30 PM