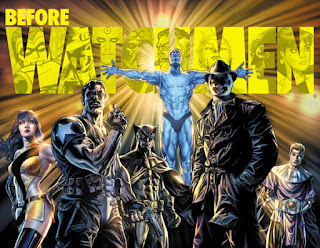 Hello again my dear readers. It’s been a while since we've talked about Before Watchmen hasn't it? I do apologize for the delays – and I will get into that in a moment – but for now, let’s reflect on that, several months ago, with much attention and controversy, DC Comics announced and began to release a number of prequel mini-series to the revered and influential comic and alternate history milestone series, the Watchmen, under the self-explanatory umbrella title Before Watchmen.

I managed to take a look at the first few issues of these various miniseries as well, and though mixed in quality, I was looking forward to the next few, and sharing my opinions with you. Alas, it was apparently around the time of my last review that there began the first of a long-stringed series of behind the scenes issues at DC Comics concerning the various Watchmen lines. This ranged from the death of artist Joe Kubert, who worked on the Nite Owl miniseries, causing delays with that line, the additions of two more miniseries, based on Moloch and Dollar Bill respectively, along with the apparent cancellation of the epilogue comic, which only further threw off the release schedule, which in turn led to the Crimson Corsair comic-within-the-comic ending prematurely, all topped off with behind the scenes feuds, several creative shakeups and yet further release delays. In summary and in short, behind the scenes at least, everything that could go wrong, did go wrong, and often times this meant that issues came out weeks, if not months after they should have.

While I can’t say whether or not this effected the comics’ quality at all, it certainly didn't help the already shaky publicity and reception, and one has to wonder that given better circumstances, some of these may have been better or turned out differently. Before Watchmen, now finished, has received deservedly mixed reviews – some of the miniseries are fantastic, some decent, some questionable, some bad. Thankfully, with the possible exception of one of them, none do any real damage to the Watchmen name, some complement it nicely, and a couple may someday be looked back as true and positive additions to the overall world of Watchmen.

So now that the end is nigh for Before Watchmen, join me as I take a look back over each miniseries, discuss the strong point’s and weaknesses of each title, how they hold up on their own and when compared to Watchmen, and perhaps most importantly to each of you, if they are worth your time and money as the trades come out this summer. So join me, my dear readers, in one final look back at Before Watchmen!

[Editor's Note: Check back every Friday for two articles, one in the morning and the other in afternoon, on Before Watchmen.]