Raybould Marsh, one of “our” Britain’s best spies, has travelled to another Earth in a desperate attempt to save at least one timeline from the Cthulhu-like monsters who have been observing our species from space and have already destroyed Marsh’s timeline. In order to accomplish this, he must remove all traces of the supermen that were created by the Nazi war machine and caused the specters from outer space to notice our planet in the first place.

His biggest challenge is the mad seer Gretel, one of the most powerful of the Nazi creations, who has sent a version of herself to this timeline to thwart Marsh.  Why would she stand in his way?  Because she has seen that in all the timelines she dies and she is determined to stop that from happening, even if it means destroying most of humanity in the process. And Marsh is the only man who can stop her.

After their exodus from Earth, the last humans settled a remote planet, Nova Prime. When an alien force known as the Skrel descended from the skies, the United Ranger Corps, an elite defense unit, valiantly resisted. Centuries passed without an attack, and many colonists believed that, with other security measures in place, the resources devoted to maintaining their military strength would be better spent elsewhere. Little did they know that trouble was coming to Nova Prime—and it had a taste for blood.

The latest in a long line of decorated warriors, Conner Raige is one of the Rangers’ most promising young cadets, although his brash confidence and tendency to act on instinct have earned him as many skeptics as admirers. Conner’s ancestors were on the front lines of humanity’s victory against the Skrel. But when a deadly ground war breaks out, Conner’s up against an entirely different beast—because, this time, the Skrel have brought a secret weapon: ferocious killing machines designed to eliminate humanity from Nova Prime . . . and the universe.

Bronze Gods by A. A. Aquirre

Janus Mikani and Celeste Ritsuko work all hours in the Criminal Investigation Division, keeping citizens safe. He's a charming rogue with an uncanny sixth sense; she's all logic--and the first female inspector. Between his instincts and her brains, they collar more criminals than any other partnership in the CID.

Then they're assigned a potentially volatile case where one misstep could end their careers. At first, the search for a missing heiress seems straightforward, but when the girl is found murdered--her body charred to cinders--Mikani and Ritsuko's modus operandi will be challenged as never before. Before long, it's clear the bogeyman has stepped out of nightmares to stalk gaslit streets, and it's up to them to hunt him down. There's a madman on the loose, weaving blood and magic in an intricate, lethal ritual that could mean the end of everything...

From New York Times best-seller and science fiction and fantasy mistress of adventure Mercedes Lackey, #2 in a new pulse-pounding saga of modern-day humans with superpowers. After turning back an invasion of super-science power Nazi war machines, the heroes go on the hunt for the Nazi masters and take the battle to the bad guys.

After an Earth-scarring apocalyptic battle, humanity’s meta-heroes must take the fight to the enemy. Their task: hunt down the secret puppetmasters behind the Nazi robot invasion, the Thule Society, and cut off the multi-universe plague the Thulians have unleashed. It’s go time once again for the meta-heroes including fire-bender John Murdock, hacker-witch Vikki Nagy, healer Belladona Blue, super-quick Mercurye–and most of all for their ghostly ally, Seraphym, the spirit of the world who uses her secret influence to direct the fight against a Thulian-based tyranny of evil that is fast descending upon the entire universe! 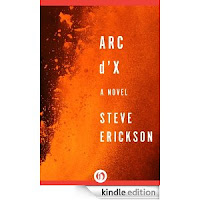 In a desperate effort to liberate herself, a fourteen-year-old slave—mistress to the man who invented America—finds herself flung into a different time and world

Steve Erickson’s provocative reimagining of American history, Arc d’X begins with the relationship between Thomas Jefferson and Sally Hemings. With “skin . . . too white to be quite black and too black to be quite white,” Sally is loved only to the extent that she can be possessed, and finds hope only in the promise that her children’s lives will be different from her own. The couple’s paradox-riven union echoes through the ages and in an alternate epoch where time plays by other rules. In Aeonopolis, a theocratic city at the foot of a volcano, priests seek to have Sally indicted, and in an emptied-out Berlin, the Wall is being rebuilt. Dizzyingly imaginative, Arc d’X is an unrivaled exploration of “the pursuit of happiness.”

Tours of the Black Clock by Steve Erickson 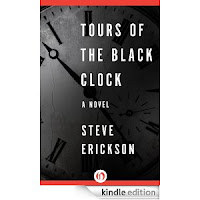 The course of a century is rewritten in this fabulously warped odyssey, named a best book of the year by the New York Times

Tours of the Black Clock is a wild dream of the twentieth century as told by the ghost of Banning Jainlight. After a disturbing family secret is unearthed, Jainlight throws his father out of a window and burns down the Pennsylvania ranch where he grew up. He escapes to Vienna where he is commissioned to write pornography for a single customer identified as “Client X,” which alters the trajectory of World War II. Eventually Jainlight is accompanied by an aged and senile Adolf Hitler back to America, where both men pursue the same lover. Tours of the Black Clock is a story in which history and the laws of space and time are unforgettably transformed.

Do you want to see your work given a shout out on New Releases? Contact us at ahwupdate at gmail dot com.  We are looking for works of alternate history, counterfactual history, steampunk, historical fantasy, time travel or anything that warps history beyond our understanding.