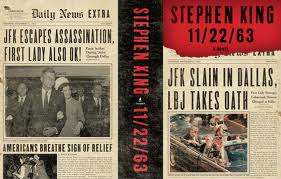 Last Monday I shared an important headline for all alternate historians: J.J. Abrams wants to adapt Stephen King's 11/22/63. For those who don't know, here is the description from Amazon:

Life can turn on a dime—or stumble into the extraordinary, as it does for Jake Epping, a high school English teacher in a Maine town. While grading essays by his GED students, Jake reads a gruesome, enthralling piece penned by janitor Harry Dunning: fifty years ago, Harry somehow survived his father’s sledgehammer slaughter of his entire family. Jake is blown away . . . but an even more bizarre secret comes to light when Jake’s friend Al, owner of the local diner, enlists Jake to take over the mission that has become his obsession—to prevent the Kennedy assassination. How? By stepping through a portal in the diner’s storeroom, and into the era of Ike and Elvis, of big American cars, sock hops, and cigarette smoke. . . . Finding himself in warmhearted Jodie, Texas, Jake begins a new life. But all turns in the road lead to a troubled loner named Lee Harvey Oswald. The course of history is about to be rewritten . . . and become heart-stoppingly suspenseful.

In Stephen King’s “most ambitious and accomplished” (NPR) novel, time travel has never been so believable. Or so terrifying.

Originally it had been reported in August 2011 that Oscar-winning director of The Silence of the Lambs, Jonathan Demme had picked up the film rights to novel before it had even hit the shelves. King was even set to produce until in December 2012 when Demme announced he had backed out of the project citing creative differences with King.

The project seemed doomed until Abrams (director of the Star Trek reboot, Mission Impossible III and the upcoming Star Wars: Episode VII) announced his production company Bad Robot is in negotiations with Warner Bros to adapt the book for the small screen. Now I know I originally said film on Monday and I apologize, but we can confirm it is now for television and could either be a series or mini-series.

This is actually better news then the book being adapted into a film, especially coming on the heels of BBC America's adaptation of Jonathan Strange & Mr Norrell and the airing of "Snodgrass" on SkyTV. It is insanely difficult to make a faithful adaptation on film, but television gives you a lot more time and space to get it right (i.e. Game of Thrones). Also several people expressed concern on Monday that Abrams was taking on to many projects after I mistakenly called it a film . Now its likely he will be more of an overseer rather than boss, offering creative ideas but leaving the nitty-gritty work to others. 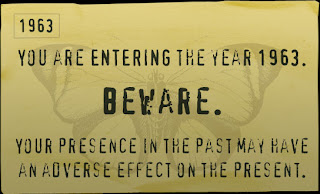 The only downside is the story itself is mostly a time travel/weird fiction tale than alternate history. You don't get a glimpse of the alternate world Epping creates until the end of the book. Expect a lot of "fish out of water" moments as Epping adjust to the past, some vaguely horror scenes as we visit old King haunts, battles with the obdurate past and an ongoing mystery surrounding the "Yellow Card Man" who might have a larger role to remind the audience they are not dealing with historical fiction. We probably won't see the alternate history until the end of the series.

Of course this is all assuming they make it a mini-series and not a full series. We will just have to wait and see. In the meantime, I promise to keep you posted on all further developments.