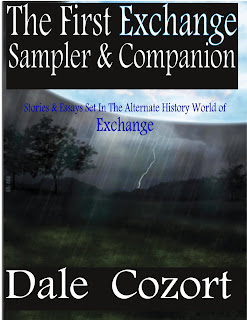 Imagine waking up one morning, and as you yawn and stretch you realize something; it's too quiet outside. You go to the window, open the curtains and at first everything seems ok. Then you look towards the end of the garden, and where you should see a busy suburban street, all there is is grasslands as far as the eye can see. In the middle distance, what you thought was a large boulder slowly sits up and starts ambling along, munching on the grass. With a shock, you realize that it's a Wooly Mammoth...

Welcome to the world of Exchange by Dale Cozort, a world where our reality co-exists with one in which our ancestors never amounted to anything, and the big mammals never died out at the end of the last Ice Age and evolved without mankind to bother them. Every so often, these two realities collide, and a chunk of our world of up to a few hundred square miles in size gets swapped with its counterpart in what has become known as "bear country". These Exchanges happen with about 3 days warning, can last up to a couple of weeks, and for those few weeks, life in the exchanged area suddenly becomes a hell of a lot more interesting - if you thought the "rat race" was bad, imagine waking up to find a Sabretooth Tiger with 10,000 years of evolution under its belt peering in your window!

The story in this novel is based around what happens with one of these exchanges, where a woman trapped in an Exchange who has to rescue her kidnapped daughter before the Exchange ends, trapping them in Bear Country forever. What I am reviewing here however isn't the novel itself, but a "sampler companion" to the novel.

This is not so much a book in itself as a literary version of the "extras menu" on a DVD; here, you get some extra short essays and novelettes that expand on the story/universe created in the novel itself. Some are "directors cuts" or samplers/first drafts/deleted scenes of what finally ended up in the novel, some are essays expanding on the background of Exchanges, like the logistics of what happens when an exchange is detected as about to occur, and the ecological implications of having a large chunk of an alien ecosystem dropped in on our world for a few weeks. The last chapter then is a "sneak preview" of the sequel to the novel, just to whet the appetite...

The sampler is meant to be used like the DVD extras menu, where you dip in and out of whatever section/chapter you want, but if like me you prefer to start at the start and work your way up, the book is arranged as follows: sample excerpts from the book, then short stories based around the events of the book, then some essays about why the author wrote what he did, then some "world-building" essays fleshing out some of the logistics and science around how the exchanges would actually work, then some "making of" samples of the first drafts of what eventually turned out to be the book, and then finally a sneak preview of the upcoming sequel.  To me, starting with the excerpts and the short stories is putting things slightly out of order, as if like me you haven't read the original book, starting with these is landing you into the action with no frame of reference as to what is actually going on or what people are talking about.

That minor quibble aside, this sampler is a good teaser opener into what promises to be an interesting take on the "people out of time and place" sci-fi trope (as soon as my credit card clears I'll probably be paying a visit to Amazon based on this). If you've already read Exchange, then this sampler is still worth a read as it may fill in some gaps and questions you had while you were reading it. So, if the idea of the Exchange tickles your curiosity buds, then this is a good place to start scratching them....