So I wasted an hour yesterday trying to make a video for you guys, but the webcam feature YouTube provided kept failing and deleting everything I made. I tried using the generic recorder my computer came with but the quality was so bad I gave up. I need to do some more research into making videos for YouTube before I try this again.

I am doing a batch of posts for Amazing Stories on steampunk. It starts with a quick overview of the genre so check it out if you are interested. Tomorrow's post is a review on The Difference Engine by William Gibson and Bruce Sterling. My next topic is going to be music in SF literature for those wondering. I also been talking with Twilight Histories host Jordan Harbour. You will see my interview with him later this week and perhaps an in-depth discussion about the genre on his podcast sometime in the future.

Update: The River of No Return by Bee Ridgway

I don't want to forget about time travel, so now is a good time to bring it up with some info on this book that caught my attention last week: The River of No Return by Bee Ridgway. Here is the description from Goodreads:


In Bee Ridgway’s wonderfully imaginative debut novel, a man and a woman travel through time in a quest to bring down a secret society that controls the past and, thus, the future.

“You are now a member of the Guild. There is no return.” Two hundred years after he was about to die on a Napoleonic battlefield, Nick Falcott, soldier and aristocrat, wakes up in a hospital bed in modern London. The Guild, an entity that controls time travel, showers him with life's advantages. But Nick yearns for home and for one brown-eyed girl, lost now down the centuries. Then the Guild asks him to break its own rule. It needs Nick to go back to 1815 to fight the Guild’s enemies and to find something called the Talisman.

In 1815, Julia Percy mourns the death of her beloved grandfather, an earl who could play with time. On his deathbed he whispers in her ear: “Pretend!” Pretend what? When Nick returns home as if from the dead, older than he should be and battle scarred, Julia begins to suspect that her very life depends upon the secrets Grandfather never told her. Soon enough Julia and Nick are caught up in an adventure that stretches up and down the river of time. As their knowledge of the Guild and their feelings for each other grow, the fate of the future itself is hanging in the balance.

Sounds interesting, doesn't it? And it has a 4.22/5 on Goodreads as I write this post. Turns out, however "Bee Ridgway" is just a pen name. The author's real name is Bethany Schneider. You can catch her interview over at The Qwillery and read her article on writing time travel novels over at Psychology Tomorrow.

Found a couple more reviews on Gail Carriger's new novel Etiquette & Espionage, book one of the Finishing School series. First, here is the description from Amazon:

Fourteen-year-old Sophronia is a great trial to her poor mother. Sophronia is more interested in dismantling clocks and climbing trees than proper manners--and the family can only hope that company never sees her atrocious curtsy. Mrs. Temminnick is desperate for her daughter to become a proper lady. So she enrolls Sophronia in Mademoiselle Geraldine's Finishing Academy for Young Ladies of Quality.

But Sophronia soon realizes the school is not quite what her mother might have hoped. At Mademoiselle Geraldine's, young ladies learn to finish...everything. Certainly, they learn the fine arts of dance, dress, and etiquette, but the also learn to deal out death, diversion, and espionage--in the politest possible ways, of course. Sophronia and her friends are in for a rousing first year's education.

Set in the same world as the Parasol Protectorate, this YA series debut is filled with all the saucy adventure and droll humor Gail's legions of fans have come to adore.

Flipping the Page described the novel as "a unique book" and "a keeper!", but the review did say you can get lost in the background information. Sarah Bruch at SFcrowsnest also gave a good review for the book and concluded "[t]his is another series for lovers of Carriger filled with her dry wit, fabulous characters and her own take on the steampunk world, definitely one to put on the to be read pile."

Now generally I do not read YA books, but for the younger readers of this blog who like a little steam in their alternate history, this might be a series for you.

The upcoming SF, alternate history film After Earth (the POD being a space ship crash landing on Earth in 1908) is premerieng this summer on June 7. A new trailer for the film came out last week, let's watch it below:
Rob Bricken of io9 wasn't particularly impressed by the trailer, pointing out that 1000 years is too short of a time for evolution to change Earth's wildlife so drastically. Personally I am less than thrilled about this film by M. Night Shyamalan, but Charlie Jane Anders of io9 seems hopeful that "legendary control freak Will Smith" can keep the plot from spiraling out of control. We shall see, but I think I won't see until I can watch it free on Netflix. 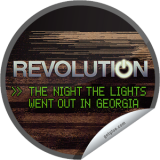 NBC announced it has ordered a new season for the sci-fi drama Revolution from Eric Kripke and J.J. Abrams for the 2013-2014 season. Alternate historians were less than impressed when the show first aired, but it has grown in popularity with the rest of fandom. Paul Levinson in his review of episode 14 called Revolution "one of J. J. Abrams' best franchises." To tell you the truth I still haven't watched the show, but do you agree?

The Old Gods is the fourth full expansion for Crusader Kings II, Paradox’s strategy/RPG of medieval scheming, dynastic fortunes and crusades against the unbeliever. The Old Gods expansion lets the player start two hundred years earlier than the Crusader Kings II base game, at the height of Viking power and when Christianity had yet to penetrate many of the dark forests of the continent, and the power of Islam was still on the rise. You can read the developer diaries to get more information on this upcoming expansion.

Next on the agenda, Paradox is preparing to once again provide the global conquest gamers have hungrily desired with their upcoming empire-building game, Europa Universalis IV. The award-winning series that has sold over a million copies and redefined grand strategy gaming is returning in Q3 2013. Now, Paradox is sending out a Call to Arms to their greatest fans, and asking for their help to win the world’s hearts and minds for the Europa Universalis army in an epic community-building campaign. Europa Universalis fans all over the world can recruit their friends and receive exclusive rewards.
The Call to Arms Rewards for loyal fans include bonus in-game DLC, a Developers Strategy Guide, Compendium Universalis, the e-books The Art of War and The Prince, and a copy of Europa Universalis III Chronicles. The “World Conqueror” rewards for the most loyal fans include exclusive beta access to Europa Universalis IV, a mention in the game credits, and a trip to Stockholm to play multiplayer with the developers.

“Over the years, you have all helped us build one of the most dedicated game communities available. We wouldn’t have come this far if not for the loyalty of our strategy fans everywhere, and we want you to know that,” said Thomas Johansson, project lead for Europa Universalis IV at Paradox Development Studio.

“As we prepare to launch our empire-building game Europa Universalis IV, we want to bring even more strategy fans into our community. We want you all to experience the drama that only the grand stage of history can provide. So if you want to support Europa Universalis IV, please spread the word and invite your friends – if you believe that they long to conquer the world. Strategy Gamers of the World – this is our Call to Arms.”

May 30: Deadline for submissions of It Came From the North, a Finnish speculative fiction anthology.

5 Ridiculous Myths Everyone Believes About the Wild West by J. Wisniewski at Cracked.
Alternate Geology by S-Sherman at Other Times.
Cover & Synopsis: “Luminous Chaos” by Jean-Christophe Valtat at SF Signal.
Doc Savage: His Apocalyptic Life – New Revised Deluxe Hardcover Edition at Meteor House.
Duck and Covers: Can you believe I’m not going to rip one of these? by Justin at Staffer's Book Review.
The Great Man of History … An Implied Counterfactual by Brooks D. Simpson at Crossroads.
How to have a successful blogtour by Alison Morton.
I Prefer My Steam Punked by Jared Axelrod at Steamed!
If media covered America the way we cover foreign cultures by Jahanzeb Hussain at Keeping Sane.
Imagine by Kassy Tayler at Steamed!
Lavie Tidhar’s Top 5 Five Weird Trips to Mars at SF Signal.
Paul Levinson on the The Tricky Business of Time Travel at SF Signal.
Speculative Fiction's Love Affair with Sherlock Holmes-It's not a Mystery (Part 2) by John DeNardo at SF Signal.
That time Polish partisans stole a Nazi V2 rocket by George Dvorsky at io9.
US tries new aerial tools in Caribbean drug fight by Ben Fox at Yahoo!
What if the Tsarnaevs Had Been the "Boston Shooters"? by John Cassidy at The New Yorker.
Woman Time Travels Into Iconic Scenes at Yahoo! Shine.
Zero-Magic Fantasy by Felicity Savage at Amazing Stories.

The Alteration by Kingsley Amis at Tor.com.
The Mine by John A. Heidt at Tonight's Reading.
Necessary Evil by Ian Tregillis at Pat's Fantasy Hotlist.
Prophet of Bones by Ted Kosmatka at io9.

Counterfactual History in a New Video Game (BioShock Infinite) by Robert Whitaker at Not Even Past.
The Most Atmospheric Steampunk Video Games by Gergo Vas at Kotaku.
Snail Games bringing fantasy, steampunk together in 'Black Gold' at E3 this year by Pamela Blalock at Examiner.com.