Is anyone willing to be a volunteer proofreader/copy-editor for Alternate History Weekly Update? With my busy schedule I don't always have the time to spend proofing my posts before publication. So if you want to help, I am looking for someone available on short-notice to proof articles before publication. I can't pay you (yet), but I can help promote your websites, blogs and projects. Contact me at ahwupdate at gmail dot com.

Welcome to our new reader from Tunisia and congrats on your new democracy! This week we feature three interviews with a multi-award winning author, a friend of the blog celebrating his first publication and a popular steampunk author/podcaster. I will round out the week with a review of A Feast Unknown by Philip José Farmer. Thanks to Titan Books for sending me a review copy.

Have I ever mentioned how much I hate it when people start writing an alternate history shortly after a major election speculating on what would happen if the other party won? Yes I have, but to reiterate: they suck.

Still I guess we can't avoid thinking about what might have been after such a contentious American presidential election...so enjoy: 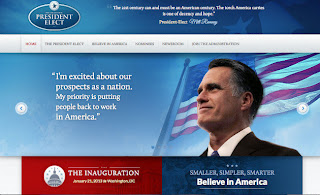 That is what "President-Elect" Mitt Romney's website would have looked like if he won the presidency. It was live for only a short time, but long enough to get some screen shots. You can see more screenshots at the Political Wire, including the page asking for your opinion on who should make up Romney's cabinet.

The new website even gives some hints on what President Romney would do after being inaugurated: "On his first day in office, Mitt Romney will issue an executive order that paves the way for the federal government to issue Affordable Care Act waivers to all 50 states. He will then work with Congress to repeal the full legislation as quickly as possible."

Having a snazzy website, however, is not enough. Romney actually had to win the election to be the President-Elect. How could he have done that? BuzzFeed has come up with a few scenarios (thanks to io9 for finding it for me), but they all involve repealing the right to vote to certain groups, like women, blacks and others.

Truly these screen shots and the above articles that went with them are important resources for anyone willing to write a legitimate President Romney alternate history when enough time has passed to give us an unbiased perspective.

Salem: The Crafting: More Ships Setting Sail for New World
The New World is expanding! Paradox Interactive and Seatribe today announced that Salem: The Crafting MMO, PC Free-to-play, has launched two additional servers this week, allowing for more beta testers to enter a fantastical New England and carve a new life for themselves in the uncharted wilderness during the colonial period.

To commemorate the event, Paradox Interactive will begin distributing beta keys to those that have yet to experience 17th century living in a world filled with alchemy, witchcraft, and permadeath. For details on how to set sail for the Americas, visit the beta sign up site for Salem: The Crafting.

The World Fantasy Awards were announced last week and the alternate history novel Osama by Lavie Tidhar won the best novel. Here is a description:

In an alternate world without global terrorism, a private detective is hired by a mysterious woman to track down the obscure creator of the fictional vigilante, Osama Bin Laden...

Joe’s identity slowly fragments as his quest takes him across the world, from the backwaters of Asia to the European capitals of Paris and London. He discovers the shadowy world of the Refugees, ghostly entities haunting the world in which he lives. Where do they come from? What do they want? Joe knows how the story should end, but is he ready for the truths he will uncover... or the choice he will have to make?

Lavie Tidhar was in Dar-es-Salaam during the American embassy bombings in 1998, and stayed in the same hotel as the Al Qaeda operatives in Nairobi. Since then he and his now-wife have narrowly avoided both the 2005 London, King’s Cross and 2004 Sinai attacks—experiences that led to the creation of Osama. He is the author of many novels, including the Bookman trilogy and is a prolific short story writer.

Congrats to Lavie and all the winners (you can see a complete list at Tor). You can also watch the ceremony on YouTube:

Nov 15-17: Run of the steampunk version of "Sherlock Holmes" in Chanhassen, MN.

The Mongoliad: Book Two Collector's Edition by various authors
This handsome hardcover edition of The Mongoliad: Book Two features an exquisite cover with foil stamping, deckled edges, a ribbon marker, an illustrated character glossary and a Foreworld map printed on the end-sheets. It also includes Dreamer: A Prequel to the Mongoliad Trilogy.

The Inexplicables by Cherie Priest
Rector “Wreck ‘em” Sherman was orphaned as a toddler in the Blight of 1863, but that was years ago. Wreck has grown up, and on his eighteenth birthday, he’ll be cast out out of the orphanage. And Wreck’s problems aren’t merely about finding a home.

Zombie Jesus and Other True Stories edited by Max Booth III
What if John Wilkes Booth had a good reason for killing Lincoln? A reason kept secret to protect the innocent; a reason so sinister that it would turn your hair white as light. What if Jack the Ripper was the protagonist of his life story, and he was only trying to save the world from the apocalypse? What if there was an agency somewhere out there, responsible for the death of every single celebrity? What if the Titanic wasn't just carrying the living? What if there was more than just lava that erupted from Mount St. Helens? What if, what if, WHAT IF!? [Review at Perpetual Motion Machine Publishing.]

"A Captain of the Gate" by John Birmingham
A 'What if' story of the Cold War ... a small piece of alternate history of the period told via a biography of one of its players, Lieutenant Branch McKinnon, an adventurer in a different post-WWII world of American isolationism.

Land of Hope and Glory by Geoffrey Wilson
It is 1852. The Indian empire of Rajthana has ruled Europe for more than a hundred years. With their vast armies, steam-and-sorcery technology and mastery of the mysterious power of sattva, the Rajthanans appear invincible. But a bloody rebellion has broken out in a remote corner of the empire, in a poor and backward region known as England. [Read my review.]

The Scourge by Roberto Calas
A mysterious plague descends upon 14th century England, ravaging the country and trapping the souls of the afflicted in eternal madness. The feudal hierarchy--and even the church itself-- slowly crumbles as the dead rise to feed and the living seek whatever shelter they can. The bishops of England call for calm and obedience, but one man isn’t listening.

Stalin's Hammer: Rome by John Birmingham
Ten years have passed since Admiral Kolhammer’s 21st century battlefleet was dragged into a wormhole and thrown across oceans of time, emerging with disastrous consequences and shattering the history of the Second World War.

"Well Chosen Words" by Kristine Kathryn Rusch
Legend has it that Abraham Lincoln scrawled the Gettysburg Address on the back of an envelope as he traveled to the battlefield to dedicate a cemetery. But the legend belies Lincoln’s struggle to carefully choose the right words. Words that must soothe a fractured nation, inspire change and chart the course for the nation’s future. Because his speech in Gettysburg will change history, but not necessarily in the way he hopes. 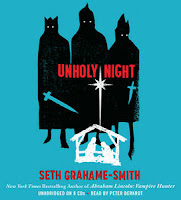 Unholy Night by Seth Grahame-Smith
They're an iconic part of history's most celebrated birth. But what do we really know about the Three Kings of the Nativity, besides the fact that they followed a star to Bethlehem bearing strange gifts? The Bible has little to say about this enigmatic trio. But leave it to Seth Grahame-Smith, the brilliant and twisted mind behind Abraham Lincoln: Vampire Hunter and Pride and Prejudice and Zombies to take a little mystery, bend a little history, and weave an epic tale.

Review of Leviathan by Scott Westerfeld at Forest of Paper.

Review of The United States of Atlantis by Harry Turtledove at Yahoo Voices.

Manga Review: The Clockwork Sky Volume One by Madeline Rosca at Seattle PI.

Castle Wolfenstein Movie on Again? by dwgrampus at Geek Syndicate.

Review: The New World Order by Elisabeth Shuker at The Yorker.

Review of Elementary: Season 1, Episode 3, 4, 5, 6 done by David Marshall at Thinking about books.

Sir, You Are Being Hunted successfully Kickstarted, celebrates with game footage by Richard Cobbett at PC Gamer.