I’m from Birmingham, England, and grew up wandering the suburbs, reading SF and listening to prog rock when both were still thought pretty cool. In a way, I’m still recovering from these two obsessions. I always rather fancied being a writer. That, or a footballer, or a musician. But I was rubbish at both.

My early experience in reading SF broadened into liking many kinds of fiction, but one of my all-time favourite books remains Pavane by Keith Roberts. If any you haven’t read this masterpiece, which is one of the great works of post-war English fiction, you really should. Changing history seemed to me to be a way of turning a key into a strange and wonderful world, whilst leaving the door open to the characterisation, atmosphere and detail that you more often find in mainstream fiction. Nowadays, I don’t think “I’ll write this as an alternate fiction”. More that it’s a tool to finding something that I want to express and exploring an interesting and challenging world.

What is Wake Up and Dream about?

It’s set in the USA, and to a degree it’s about American fascism, just as my previous Sidewise-award winning novel The Summer Isles was about English fascism. In neither case were any invading Nazis, or much goose-stepping, involved. The setting is early 1940s Los Angeles, and the main character is a down-at-heel unlicensed private eye called Clark Gable. The guy once nearly made it as an actor, but a new technology called the "feelies", which essentially allows emotions to be recorded and transmitted for the purposes of entertainment, got in the way. Essentially, it’s a noir-ish Los Angeles conspiracy thriller with some wondrous science or supernatural mystery (you can really take your pick) thrown in.

How did the Liberty Party came to be in Wake Up and Dream?

The USA in the 30s was in political turmoil. There was a serious plot by senior Wall Street figures to overthrow Roosevelt because his New Deal was considered too "socialist" and put up some kind of unelected "national unity government" - this is well-documented. Then there's eugenics, and there was still black/white segregation in public places in many states. The nice new housing developments which were going up in places like Los Angeles had clear "no blacks and no Hispanics" policies. Oh, and have I mentioned the Klu Klux Klan? With all of this, and more, the idea of a right wing party taking a step towards electoral respectability, and in particular playing on staying out of the war in Europe in the hope that the Nazis would deal with communist Russia, was an easy step to take.

How easily do you think it is for a nation to swing that way politically?

It's when people start looking around from someone else to blame when things start to go wrong. Which can happen anyway, as it's really nothing but human nature writ large.

What inspired you to write the novel?

Partly, it was the idea of the feelies themselves. Although it doesn’t really happen that way, it makes a kind of sense to imagine we pick up basic feelings, from lust to anger to excitement to love, when we’re nearby others. Hence love at first sight. Hence the behaviour of crowds. So, I wondered, how would it work if these feelings could be recorded, and then replayed? The LA setting, once you start thinking in terms of the entertainment industry, seemed pretty obvious. Hardly new for this kind of thing, but the layering and approach of my book is, I hope, fresh and inventive. I love thrillers, and then, the idea of writing about something through the eyes of Clark Gable… who wouldn’t want to have a go at that?

There’s a book called the A to Z of Los Angeles by two guys called Pitt, which was a very useful reference. That, and The Whole Equation, a History of Hollywood by David Thompson. And all those old black and white movies, and The Player by Michael Tolkin, which is one of the great Hollywood novels. Then, I have to say, Google. If I wanted to see a particular street, I could click right to it. Of course, things have changed since the 1940s, and my world’s an alternate one. So if reality got in the way, that wasn’t an insuperable problem. 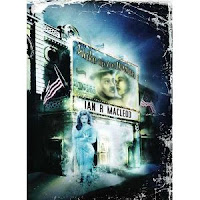 Ben Baldwin. That took a while to get right, but Ben was very receptive and imaginative, and I’m pleased with the result.

How did it feel to win the Sidewise Award again?

Well, I’ve been lucky enough to be nominated for and win quite a few awards over the years. But I’ve come to expect not to win, or be nominated, for the awards I might reckon a piece of mine could have a chance with, and to occasionally win awards which I’ve already decided I’m obviously not going to get. I’ve had SF awards and nominations for horror stories, fantasy awards for SF stories… You name it. Not that I’m complaining, of course. So, I was pretty proud of what I did with Wake Up and Dream. But, seeing as it really is an alternate history novel (although it’s other things as well) I was chuffed and surprised in about equal measure when it won the Sidewise Award.

Do you plan to write any sequels to Wake Up and Dream?

The end of the book, although things are wrapped up, does leave that door ajar, if not fully open. I don’t like repeating myself, but we’ll see — especially if people start money at me to do so!

Yeah — first of all, there’s a young adult novel which I’m currently looking for some beta-testing readers for. It’s called Lisa Moon and the Leonardo Timepiece. So, any adults and/or young people who are at all curious should get in touch and I’ll happily send them an extract with no strings attached other than a hope for a little feedback. Here’s the link to the contact page on my site, so just mail me through that to let me know...

Otherwise, I’m also at work on a big, dark, history-spanning vampire novel. Seeing as I don’t honestly believe in vampires, who are essentially magical beings, there are probably a few threads of alternate history in there as well.

Since you are working on vampire novel, have you read any of the Anno Dracula series by Kim Newman?

You've just reminded me that I should!

I’m just finishing The Sick Rose by Erin Kelly — a more than decent psychological thriller. That, and I greatly enjoyed White Bicycles by Joe Boyd — Boyd was an important figure in the British music scene in the 1960s, and also remembers enough to be able to write about those times.

Talent matters far less than application and drive. Most writers I've talked to agree that you do probably need some basic linguistic skills and a willingness to think a little outside the box, but the rest comes from wanting to write and get published to a stupid extent. When I get rejection slips (and, like almost all writers, I still do) my reaction is, somehow, to want to write something else, or improve on what I've already done. You really have to be determined and give it your all. Not that that’s going to get you fame and riches, but it might just get you a little noticed by someone else, somewhere out there in the big, wide, world.

Yeah - it was from The Magazine of Fantasy and Science Fiction. A standard one, when I was about 15, but the did have a nice colour print of a cover on the far side, which I was a neat touch.
Posted by Mitro at 11:00 AM