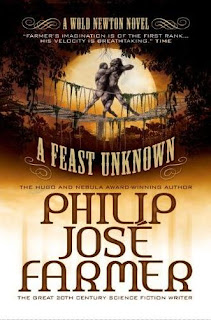 If you are not interested in reading a book where Tarzan get raped by an overweight Albanian, stop reading this review now.

Still with me? Good, lets go.

Our review today covers A Feast Unknown by Philip José Farmer. If you have not read anything by Farmer, I highly recommend you do so immediately. My fellow Bradley alum (go Braves) is one of history's most underrated science fiction authors. His works push the boundaries of what SF is allowed to cover and A Feast Unknown is no exception. The novel is part of his Wold Newton Universe of novels. This series of fictional mash-ups, where many pulp heroes can trace their ancestry to those present at a meteor strike in Wold Newton, Yorkshire, England on December 13, 1795. This universe predates other fictional mash-up series like Anno Dracula and League of Extraordinary Gentlemen.

We learn about our world's secret history through the eyes of Lord Grandrith, the legendary "Apeman" and bastard son of Jack the Ripper, who was the basis for the fictional character Tarzan. His world is upset when his home in Kenya is attacked by both the Kenya government and a group of Albanian mercenaries. Grandrith, however, can't hide and lick his wounds. He has a meeting with "the Nine", the secret order of immortals who control the world through their monopoly of a life sustaining elixir and they wait for no one.

As he travels west into Uganda to the lair of the Nine, Grandrith finds himself hunted by Doc Caliban, the historical Doc Savage. Savage blames Grandrith for the death of his lover (and cousin) and will not stop until the Lord of the Jungle is dead. As the two pulp titans battle against each other, questions abound. Why can't Grandrith or Savage get an erection unless they commit an act of violence? What role does the Nine have in the conflict? What is the mysterious connection that links the lives of Grandrith and Caliban?

Titan Books has sent me many great novels and with A Feast Unknown they didn't disappoint. Marketing material for this reprint (originally published in 1969 by erotic publisher Essex House) has described the novel as being "controversial". Even for someone of my desensitized generation, this novel is not for the faint of heart. Murder, rape, nudity, ejaculation, bestiality, incest and cannibalism are just a few of taboos referenced or experienced in this story. In some sense I feel this novel did for pulp action the same thing The Dark Knight Returns did for comics or A Game of Thrones did for high fantasy. It took the genre out of the hands of children and transformed it into something adults could enjoy.

Grandrith himself is a complicated fellow. At one point he seriously considers genocide in order to save the environment (including the last remaining "Folk", the hominid species that raised him as a child) and is yet devoid of any racial prejudice, since he does not consider himself human in the first place. If Grandrith morality seems confusing, at least it is his own, and that is the point of the novel. Whether they be the Nine or the Ethicals of Riverworld, Farmer does not like beings demanding obedience simply because they claim to be older and wiser. Rebellion against the gods is a common theme in Farmer's works and while not many will subscribe to his philosophy, I think Farmer believes the best type of morality is the one you create for yourself.

Is this book for everyone? Probably not. I still recommend it, however, because every once in a while it is healthy to step outside your comfort zone and test your deeply held ideas and beliefs. If you can do it in an entertaining and engaging manner, than more power to you. Anywho, I am never going to be able to look at Tarzan the same way again after reading A Feast Unknown.