Wow. Eighty updates already? It has been a good run.

I am happy to announce that Jake Schenberg will be volunteering as a junior editor, or "editing elve" as he likes to call himself. He will be helping me by proofing some of our posts before they go live. For those who do not know, Jake is a student and aspiring writer who introduced himself to the readers of AH Weekly Update with Alternative Elections: 1844. Check it out and leave some comments.

This week we have a couple of reviews and an interview (see below). Sadly I will not be posting anything this Thursday due to Thanksgiving.

Featuring a treasure trove of new features that would make Montezuma himself jealous, Crusader Kings II: Sunset Invasion pits the European dynasties against the brutal conquering force of the ferocious Aztec civilization and they aren't here to trade chocolate!

Descending on the shores of Europe like a plague, the bloodthirsty foes bring with them exotic and deadly disease as well as a craving to massacre everyone in their path. Endurance will be stretched to the limit in order to evade being captured and having your innards dished up as a sacrifice to their greedy and vindictive gods.
Want to learn more? Stay tuned for me interview with project lead and lead designer Henrik Fåhraeus this Wednesday.

Lies my teacher told me: Robots of the Russian Revolution

Oops. Apparently those responsible for educating our children about history have zero knowledge of Photoshop. Here is the photo that should have appeared on an Australian history exam:
And here is the photo that actually appeared:
That is a mech from the popular SF franchise BattleTech. Apparently whoever put the test together used Google Image search when looking for the actual painting. Turns out this is not the first time the test maker has had problems like this. Last year the exam body was accused of plagiarism and breach of copyright.

Thankfully, we Americans know the proper way to use Google.
City of Steam launches closed beta
City of Steam, an upcoming steampunk style MMO, is now releasing keys to play their beta version. The first release has already happened, but new releases are scheduled for November 30th and December 14th, with a final ‘Winter Festival’ stretching from December 23rd to 28th.

I would suggest you dust off that manuscript, but my guess is any manuscript you created is more likely on your hard drive than on your bookshelf.

This week the dead rise in Sword & Zombie: Volume 1 edited by David Bain. This anthology features "medieval, fantasy and sword and sorcery stories prominently featuring zombies." There is no official deadline (open until full) and word count is 3500+.

Those academics among us should check out this press release from LoneStarCon 3, next years WorldCon. They are looking for papers on science fiction and fantasy genres, but steampunk, Old West/frontier themes and Spanish language SF is also appreciated. Deadline is Dec 31st, but you need to be going to the convention to submit a paper.

Need help writing? Read 8 Words to Seek and Destroy in Your Writing by Rob D. Young at Lit Reactor.

More things to do for the brass and corset crowd:

Nov 30: Virginia City (NV) Christmas Ball has been described as "President Lincoln Meets Steampunk". Will there be vampires?

Dec 1: The next meeting of the Cincinnati Steampunk Salon.

Never Was, Nor Ever Will Be by Vaughn Stranger
I love writing alternate history stories. Several of those included in this collection are set in pasts that never happened. Others are set in futures that events have made unreachable.

"The Beast of the Bosporus" by Matthew Quinn 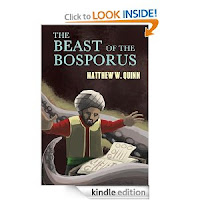 The Battle of Lepanto left the Ottoman Empire's navy in ruins. Although Grand Vizier Sokollu Mehmed Pasha has overseen the replacement of every lost ship, he fears economic trends are against the Empire. Seeking an advantage over his Latin foes, the pasha seeks knowledge man was not meant to have, a quest that brings him face to face with the Great Old Ones...

Check out Matt's exclusive interviews with Sokullu Mehmed Pasha and  Joseph Nasi, Duke of Naxos at The World According to Quinn.

"Out of Time" by Jamie Sedgwick
Millions of years in the future, a lonely and old time traveler scrawls the last few pages in his journal. As he writes, he re-examines his life, his adventures, and the choices that got him there, and he begins to wonder if it's too late to change his mind.

"A Steampunk Carol" by Steven R. Southard
That stuffy Victorian inventor, Stanton Wardgrave, is back again, eight years after inventing holograms and meeting the American Josephine Boulton. Married now, with a son and daughter, he’s dealing with rather too much balderdash and poppycock this Christmas Eve. Conversing with his dead father? Expecting three visitors? It all seems so very Dickensian. But he knows he’s not at all like that Ebenezer Scrooge fellow...is he? 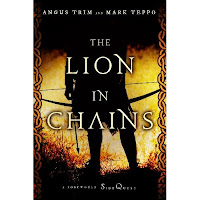 "The Lion in Chains" by Mark Teppo and Angus Trim, narrated by Luke Daniels
Many were displeased with the "peace" King Richard of England brokered in the Holy Land, and his return from the Crusades wasn't greeted with cheers, but rather shackles. Now a "guest" of the Holy Roman Emperor, the Lion-Hearted is being held for an exorbitant ransom...so much money that it seems unlikely that the silver will make its way from Britain to Germany.

The 28 Best and Worst Definitions of Steampunk by Austin Sirkin at Wonder How To.

A look at "Teddy Roosevelt And World War I: An Alternative History" by Sebastian Breit at The War Blog.

Putting the Counterfactual GOP Candidates to Rest by Justin Green at The Daily Beast.

Steampunk art is now terrorism, according to the TSA by Amy Alkon at TSA News.

Book Giveaway For Zombie Jesus and Other True Stories at Goodreads.

Review of The Inexplicables by Cherie Priest at Mania.

Review of Journeys by Ian R Macleod at Thinking about books.

Review of Steampunk: An Illustrated History by Brian J. Robb at Nerd Reactor.

'The Man in the High Castle' and other Philip K. Dick works slated for film and TV adaptations by Kimber Streams at The Verge.

Cities in Motion by Paradox Interactive (see their trailer on YouTube).

‘Dishonored’ tells riveting story with remarkable gameplay by Mikaila Ketcherside at The Scribe.