I present to you, dear reader, my interview with Mark Jeffrey, author of Age of Aether: 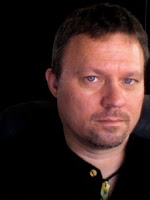 I split my time between being a serial technology entrepreneur and author. To date, I've co-founded four Internet companies and written four novels.  I'm 45 and I live in Marina Del Rey, CA with my girlfriend and a Persian cat that is basically an alive, dirty wet towel that walks around our house (he dunks his face in his water continuously ... anyway).

In addition to Age of Aether, I've also published a young adult series Max Quick: The Pocket and the Pendant (Harper Collins, 2011), Max Quick: The Two Travelers (2012) and a supernatural conspiracy thriller novel called Armand Ptolemy and the Golden Aleph (2011).

My most recent tech company is called Glossi.com (anyone can self-publish digital magazines -- ideal for authors creating 'first chapter' samplers!  I've made several!).  Before that, I co-founded web television network ThisWeekIn.com with Jason Calacanis and comedian / actor Kevin Pollak.  I also co-founded ZeroDegrees, Inc. (business social network) in 2002 and sold it to IAC/InteractiveCorp in 2004 with more than one million registered users. In 1995, I founded a popular avatar virtual world company called The Palace, Inc. which had 10 million users at its peak.

I originally 'published' the first Max Quick books as a series of episodic podcasts in 2005 and it received over 2.5 million downloads.  I have BS in Computer Science from the University of New Hampshire and a brown belt in Tae Kwon Do.

I love listening to podcasts. Have you created any other podcasts you would like to plug?

I've always loved the look and feel of the Victorian era and the early 20th century.  But it wasn't really a particular novel or work (well: other than Jules Verne, the Original punk) -- it was all the art and creations I saw pictures of all over the Internet.  You know: a steampunk computer casing, the jewelry, the pendants, the furniture, the costumes, the stuff on deviantart.com -- all that rolled around in my imagination.  Really loved all that.  And I'd seen Wild Wild West and League of Extraordinary Gentlemen and though I loved the look and general idea of both movies, I felt the stories were pretty miserable and all those great graphics and the concept was wasted.  Nobody was doing it right!  It reminded me of cyberpunk movies before The Matrix -- things like the Johnny Mnemonic movie or Strange Days -- they looked right, but the stories were about gadgets.  They were not about people.  There was no real mystery or emotion there.

So one day a friend of mine brought in a really lush steampunk picture book he'd gotten at ComicCon, and I started flipping through it and I expressed all of the above.  I said, "Steampunk is in its own pre-Matrix moment, where somebody's going to crack the right story and cross it over into the mainstream."  And then started saying, "You know, if I were to do this I would do this, and that and ... "  And the story wrote most of itself right there.

What is Age of Aether about?

Well, it's essentially a romantic intrigue story.  A North by Northwest with some gears and goggles and a little time travel thrown in there.  A man from our time, Captain Benjamin Bantam, is sent back into the past to find a lost cure for a disease called The Shadow -- but he mysteriously winds up in an alternate version of history, a steampunk version  -- complete with parasols, stunningly luxurious Aerotels, hydrologic computing, Helux-powered 'cloud growlers' and a space elevator-based moon race with Germany. And of course, there is the lovely Dr. Rachelle Archenstone ...

But when Hitler is made Chancellor in this world and the American space program sabotaged, Bantam is the only one who realizes the true depth of  the danger posed by the newly-formed Nazi party. Together with
Rachelle, he races to save this America while seeking an explanation to the mystery of this alternate past -- and with it, a way to return to his own world with the Shadow's cure. But when it comes down to a choice between his lovely Rachelle and a thousand years of Nazi rule, what will he do?  So that's the human story, the core emotional bit.  The gears and top hats are the frosting -- very important frosting! -- but not the story.

I found a lot of very interesting newspaper articles and drawings online done in the year 1900, just as the century turned, with all kinds of people prognosticating about what the year 2000 would be like.  Of course there was lots of flying and dirigibles and the such, but there were some very funny ideas in there as well, some of which I used.  For example, there was a general consensus that animals will vanish, since there would be no more use for them!  Another school held they would shrink -- so instead of poodles, rich ladies would curl up with miniature horses!  That one I had to use. 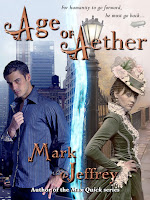 A very wonderful designer and author in her own right named Starla Huchton.  I use her for all my covers now and she never fails to delight.  Can't recommend her highly enough.

Why did you decide to format the book with such large print?

That was an actually a mistake -- but then several people reported they read it because it was the easiest on the eyes out of the pile of books they had -- they may not have selected Aether had it been smaller print.  But some people think it's goofy.  I guess the jury is out.

Do you plan to write any sequels to Age of Aether?

I have the plot for two more in my head ... so we'll see how the first one does.

Yes.  I'm writing the third Max Quick book entitled Max Quick: The Bane of the Bondsman.  I have a lot of people clamoring for that right now and I've written two books in between the second book and this one, so I kind of owe them that first.

The second Ministry of Peculiar Occurrences book called Phoenix Rising by Pip Ballantine and Tee Morris, a book about the rise of the Roman Empire, and The Anubis Gates by Tim Powers.

Yes.  Self-publish and market yourself.  Don't wait for a publisher.  Do it on your own terms.

Marketing is not something most authors have experience with. What have you found that does and does not work?

Well that's a tricky one as is it depends on your timing. When I started, podcasts were new and Apple suddenly added podcast support to iTunes, which boosted everyone's numbers.  And there were very few podcast audiobooks out there, so we all got a bit lucky.  I ended up with 2.5 million downloads!  Later Amanda Hocking famously wrote a Twilight-ish vampire romance when Kindle Direct Publishing was just getting started and made a few million in sales.

So: watch tech trends and skate to where the puck is going to be.  Right now that looks like Wattpad.com and Glossi.com to me :)
Posted by Mitro at 11:00 AM