Showcase: Story of a Party

It’s been a while since I’ve done a proper TL showcase my dear readers, hasn’t it? So to make up for lost time, and get into the spirit of the upcoming Presidential election here in the US, up until election day, I will be showcasing Alternative Presidencies!

This has always been a popular topic in alternate history, largely because of the inherent nature of electoral politics, the core of which is different men with different visions for the country and its future. Like so many other things with AH, eventually people wonder – what would happen if the other candidate had one, and their vision had been the one that guided the country rather than that of our victor? Where would we be now? Would that place be better or worse? It really is a fascinating study of what a difference a different leader can make, and I am going to highlight some of my favorite TLs with an alternative President at their heart.

That said, given both I and the Alternate History Weekly Update do not wish to alienate people of differing political beliefs. I want to make it clear that any alternative Presidencies we do cover, we do so not as political commentators, but as alternate historians.

With that said, lets delve right into looking at some of the best timelines where the highest office in the land went to another man. First up: Story of a Party.

As any good history student knows, the Republican Party came to power as a political party riding on both the collapse of the Whig Party and the rising anti-slavery tide in the 1850s, finally cementing itself as the nation’s second political party when Abraham Lincoln won the Presidency in 1860, and led the nation through the American Civil War. The first Republican candidate however, was John C. Fremont, a popular figure back in his day for his exploits in the Mexican-American War, playing a key role in early American settlement of the west, as well as being both an outspoken militarist and abolitionist. He would be the Republican presidential candidate in 1856, losing to Democrat James Buchanan.

But what if he’d won? That is the central premise of Ares96’s timeline, Story of a Party, a reboot of an earlier timeline of the same name. The POD is, as you might expect, the 1856 election, where Fremont campaigns more vigorously, and Buchanan makes a serious faux-pax making a pro-slavery speech in Illinois, allowing Fremont to carry Illinois, Indiana, Pennsylvania and California, states that he failed to carry in OTL, giving him both the election and the Presidency. 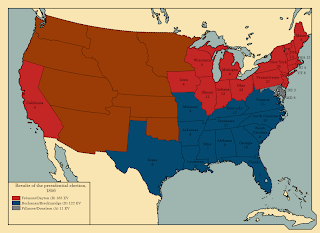 With President Fremont assuming office in 1856, there are a number of early differences from OTL. First, is that unlike Buchanan, he supports William Walker’s Nicaragua expedition, out of interest as an expansionist, and as a Californian who understands that the land could be used for a canal, to say nothing of having a bone to throw to the South. Having campaigned against popular sovereignty, when the Republicans take control of Congress in the 1858 midterms, he supports and passes a bill that reorganized the West into a number of territories, all of which prohibit slavery.

Needless to say, this Territories Reorganization Act causes an uproar in the South, sparking a number of slave states to secede from the Union in 1859, with a number of key differences. Texas stays in the Union, following both Mexican border raids and impassioned arguments from Governor Sam Houston, both of which convince Texans that they are better served within the Union. In an additional difference from OTL, Tennessee remains in the Union, while Missouri leaves the Union. The ten seceding states band together to form the Confederacy of American States, with a capital in Montgomery and led by President John A. Quitman, who died in OTL after contracting a disease at Buchanan’s inauguration, sparking the beginning of TTL’s Civil War.

Almost immediately, you can see Fremont’s leadership differ from Lincoln’s, as he both issues a formal declaration of war and begins recruiting soldiers and forming the Union Army almost immediately, among their number are Robert E. Lee, who upon receiving a promotion to Major General, a field command and promise that he would not be sent to fight against Virginia, is put in command of Union forces in Tennessee, and Samuel Clemens, who helps crew a Union gunboat becoming something of a folk hero in the process. His more forceful presence and military experience will come into play more than once over the course of the war.

The war finally turns in 1861, with Lee and the Army of Tennessee, along with the Army of Ohio under George McClellan finally plunging into the Confederacy, taking Atlanta, Milledgeville and Savanna, a campaign which cut the Confederacy in two and gave President Fremont the political capital to pass his own version of the Emancipation Proclamation. General Sherman, who replaced General Halleck as head of the Army of the Potomac, blitzes through Virginia and the Carolinas. While Generals Grant and Johnson take control of the Mississippi, and with Montgomery surrounded on all sides, the Confederacy surrenders in 1862, after three years of fighting in what would be a total victory for the Union.

War management is not the only difference under President Fremont, whose domestic policy is also very different than that of Lincoln. He proves far more willing to carve up new Unionist states from parts of the former Confederacy, including the state of Vandalia is from western Virginia, the Ozark region of Missouri and Arkansas is made into the state of Osage, and carving West Florida from the Gulf coast, as well as to keep the remainder of the former Confederacy until firm military occupation. He also takes a much more active role in defending the rights of freedman, including a better supported Freedman’s Bureau and the OTL 13th, 14th, and 15th amendments are given teeth to enforce them, and a 16th amendment prohibiting secession is also passed. William Seward, who is elected President in 1864, goes about peaceful expansion of the USA, gaining British Columbia, Baja California, Sonora and Alaska by both negotiation and purchase. 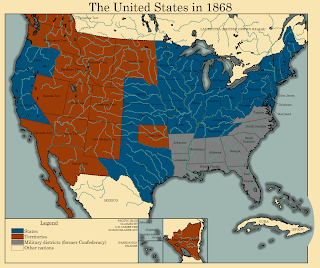 Things are not always better in the USA however – Reconstruction has proved far slower going, and the military occupation of the South is hampered by local resistance with a knack for guerrilla warfare – and given the general mindset of TTL Reconstruction is that of punishment rather than reconciliation, Union troops are all too happy to crack down even harder. With the Democrats still largely discredited by the Civil War, opposition to radical Republican rule comes in the form of the Constitutional Union party giving a centrist third party alternative to the Republicans and Democrats, and the Unionists quickly fill a niche in the Upper South. This causes issues given the recent 1868 Presidential Election, which thanks to no party getting the Electoral College majority went to Congress – following a small crisis, a coalition government is formed, with the Presidency going to Unionist candidate Andrew Curtain and the Vice Presidency going to Republican VP candidate Hannibal Hamlin, with hints of further turmoil ahead. 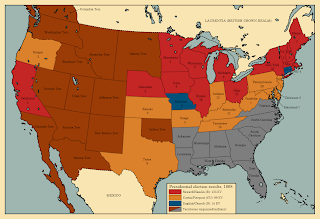 Overseas, the world has not been idle while the US has been engulfed by the Civil War. The Italian reunification wars have ended with an Italy that still lacks Venetia yet still owns Savoy and Nice. British North America, with its pacific and far west sold to the Americans, forms a far more centralized and different union than OTL Canada, called the United Provinces of Laurentia. A crisis over who can claim the Spanish crown has sparked a war between Prussia and Russia on one side and France and Austria on the other, with the tide finally turning toward the former.

In addition to being a vivid look at all the myriad of ways things could have been different throughout the Civil War, and presenting one of the most unique takes on the American Civil War I've seen yet, it provides a fine example of what different leadership in that crucial moment of our nation’s history might have caused. So few works of AH focus on how a President other than Lincoln would have handled both the Civil War and the Reconstruction, and John Fremont allows a fascinating study of one such option. Fremont’s military background and devout support for abolition leads to both a shorter and smoother civil war and more support for equal rights, but in lacking Lincoln’s calm demeanor and mercy, he both crosses many lines that Lincoln shied away from in OTL, and it sparks a much more hostile backlash from the former Confederacy. While the future of this world remains uncertain at this point – the TL is only now moving into the 1870s – given what Ares96 has hinted at, Fremont may not have given us a more perfect union…

That said, even disregarding the political angle, if you want to see a Civil War that sees Union armies under General Lee and General McClellan fighting alongside each other marching through Georgia, a USA that has states including Osage and a So-Cal Colorado, and an interesting rising European balance of power, come give the Story of a Party a read, and see a USA forged by free soil, free men and Fremont!