Review: The Story of Martha by Dan Abnett 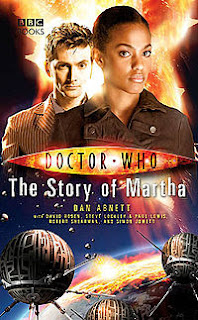 One of the persistent jokes from British radio plays in the 1960s was ‘let’s see them do this on television,’ after describing an impossible feat like one person standing on a second person’s shoulders and then pulling the first person up beside him.  A problem with any SF show from that era, like Doctor Who, was that special effects were very limited.  It was often impossible to perform the acts that the plot needed.

This does not really apply to books, of course.  The Doctor Who New Adventures could be set anywhere, in any time period, without having to worry about the high cost of special effects – or, for that matter, the availability of specific actors.  The Eighth Doctor could visit all seven previous Doctors, despite some of the actors being dead or significantly different from their Who-form.  For that matter, a massive army of Daleks could fight it out in a civil war without breaking the BBC’s entire budget.  The only real limits were the writer’s imagination.

And that, I think sums up why The Story of Martha by Dan Abnett is such a disappointment.

I never warmed up to Martha, mainly because she acted more like a lovesick puppy following the Doctor rather than as a person in her own right.  (Mind you, this worked out fairly well in some episodes.)  However, it is often difficult to create a complex character on a TV screen, so I hoped she would do better in a novel.  There are some good points in her story, I will happily admit, but the whole idea is basically wasted.

The background is simple; The Master has wrapped the whole Earth in a paradox field, creating an alternate timeline where he has crushed the human race and is now planning to build a fleet of warships to invade the rest of the universe.  Martha is travelling from place to place, trying to organise resistance and telling everyone about the Doctor, for reasons that are explained in the last episode.  In the course of her travels, she tells three different stories of her life with the Doctor and escapes the Master’s goons, as well as encountering other aliens on Earth.

So why is this a wasted opportunity?

Let’s be clear on this; the Doctor has been visiting Earth for centuries.  He has a network of friends and allies scattered across the planet, including Sarah Jane Smith (who guest-starred in an early Tenth Doctor Adventure.)  Even if we limit the scope of the Doctor’s friends to the adventures of the Ninth Doctor onward  there are still plenty of potential guest stars, ranging from Donna Noble to Jack’s Torchwood Institute.  Martha’s brother?  What about Harriet Jones?

Actually, Harriet Jones might have been the best possible person to introduce.  An interview with RTD made it clear that the Tenth Doctor’s decision to arrange for her dismissal as PM opened the gap for the Master to jump in and take over the world.  Dealing with the consequences of that decision would have made a fitting plot for the story.

If I had written it, I would have brought back all the guest stars who are no longer with us, because no one really dies in a TV world.  The Brigadier could have led resistance against the Master, along with UNIT; just imagine Martha fleeing while the remains of UNIT make a final stand against the Master’s flying servants.  Or the hidden aliens on Earth who might have joined the fight.  There was so much potential in this idea.  Instead, we get three stories that really don’t blend together.

A fan should have written this book.

Chris Nuttall blogs at The Chrishanger and has a website by the same name. His books can be found on Amazon Kindle. Check out his upcoming book The Royal Sorceress.
Posted by Mitro at 11:00 AM