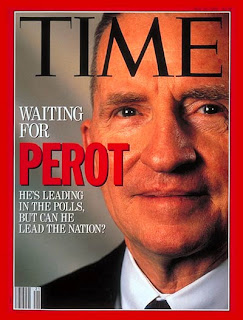 Happy Election Day my dear readers! I hope the Americans reading this have taken the time to go out and vote, I don’t care for whom, just do so! In any event, I have a very special showcase for you today, the Turtledove Award winning A Giant Sucking Sound, by MaskedPickle!

As an American, it’s only natural to look at our two party system and think ‘what would it be like if we had a third?’ At least from an AH standpoint, it’s perhaps as much of a challenge to write a plausible third party TL as it is to get one elected in real life, mainly because in the last hundred years, you really only have two choices. The first is Teddy Roosevelt’s run as a Progressive in 1912. The second, is in 1992, and a particularly peculiar Texan billionaire named Ross Perot. Though shockingly little more than a footnote, his role as a third party candidate should not be underestimated – his run is likely why President Clinton was elected as opposed to President George HW Bush winning a second term, and his platform of balanced budgets, libertarian social values, decreased economic regulation and investing in technology, energy and infrastructure would prove decades ahead of its time, with both parties adopting bits of it since then. That said, he lost due to his own habit of gaffes and erratic behavior, and likely did the country a service in doing so.

Of course, we’re in the business of asking what if – just what would a Ross Perot Presidency look like?

After getting elected by first, not withdrawing in August, and nominating populist Governor Jerry Brown as his running mate, Ross Perot is largely opposed by both parties out of a mutual desire to see the first Independent president since George Washington play ball by their rules. Needless to say, Perot chooses to destroy the two party system instead, forming his own political party, the Freedom Party, or Freedomites. Largely centrist, but attracts all types not represented by either wing or ignored by their own, it’s ranks include the likes of John McCain, Paul Tsongas, Ron Paul, Al Sharpton, Joseph Patrick Kennedy II, as well as the likes of Jon Stewart, Jello Biafra and Donald Trump. With the two party stranglehold broken, President Perot and the Freedomites begin implementing their agenda, whether or not they can reach a tripartisan agreement.

The Perot Presidency sees some great things done. Perot spearheads an international coalition of forces to intervene in Rwanda to prevent the 1994 genocide, as well as a more competent attack on Somalia which ends with a puppet regime installed in Mogadishu. In addition, he almost immediately starts pushing for national internet infrastructure akin to phone lines or highways, with the committee implementing such an approach headed by Steve Jobs. As promised, he pushed a balanced budget amendment through Congress and it passes once turned over to the states, though a similar one pushing for term limits to Congressmen failed. In addition, he enacts a version of gun registration not seen for years later in the aftermath of Waco. To top it all off, Perot prevents the implementation of NAFTA and stands up to China over Taiwan.

There are also some downsides of course. At home, in reaction to the harsher put down of Waco and Ruby Ridge, and inspired by other international terrorist movements, the brief 1990s militia movement has blossomed into a homegrown terrorist movement called Stormfront, led by the likes of David Duke, Richard Girnt Butler, Tom Metzger, David Leach and Matthew F. Hale, as the OTL lone wolf attacks are traded for attacks like the Oklahoma City Bombings and assassinations ranging from Paul Wellstone to Steven Spielberg. This was inspired in part because of the rise of doomsday cults in Asia and Islamic terror in Europe, both of which are far more successful at committing deeds far worse than OTL – one of the most stunning moments of the TL is when Aum Shinrikyo detonates a stolen nuclear bomb in Nagoya. Russia seems to have come under the grip of a would be fascist movement that is starting to make Vladimir Putin look positively warm and fuzzy, and Europe is locked in a war in Algeria combating Islamists.

Ultimately, the turmoil abroad and at home was enough that, when combined with an Perot finally snapping under the pressure, leads to Democrat Ann Richards winning in 1996. Richards, though she comes down hard on Stormfront, does so by enacting legislation that makes the OTL Patriot Act look tame, and between that and pushing for unpopular health care reform, she is in a vunerable position for reelection. Heading into the 2000 national election, one with chaotic details on all sides, including a brutally drawn out Freedomite convention, we are about to see Republican Jeb Bush, Freedomite Angus King, and even two fourth party runs from both Pat Buchannan and Jerry Brown challenge the vulnerable President Richards for the Presidency. It will be interesting to see who wins in upcoming updates.

The effects of Ross Perot’s Presidency on the United States are both good and bad. Perhaps most obviously, the end of the two party system has shaken American politics and American culture to the bone, mostly for the better. His push for improved infrastructure, especially the national internet network, in addition to proving a boon to the economy and the nation, is the sort of project we’d likely never see in the OTL two party system. That said, the rise of domestic terror due to backlash has had a telling effect on America in TTL, and the future of this America could go either way.

The international scene is just as radically different. Terrorism has become a global threat even more than OTL – ranging from the Islamic variety, which for a number of reasons, is focused largely on Europe and Russia, Aum Shinrikyo in Japan, to Stormfront in the USA. Lady Diana, who is still alive in this TL, has been vilified for marrying Dodi El Fayed and converting to Islam, which with the ongoing European War on Terror, has made her the most hated woman in Britain since Wallis Simpson. Japan’s economy has been further crippled by the terrorist nuclear attack on Nagoya. An increasingly fascist Russia led by Prime Minister Alexandr Lebed is taking steps toward reclaiming some of the neighbors. Somalia fragmented years ahead of schedule, one where Mogadishu is ruled by Hussein Mohammed Farrah Aidid. Though Perot intervenes against the genocide against the Tutsis in Rwanda, ones in Congo and the Solomon Islands take its place. The map of the world has been radically altered, with independent nations like Mindanao, Somaliland, Kurdistan, and even Quebec, and hints of a federalized Europe in the future.

Yet another hallmark of the TL is the vivid alternate pop culture, which helps characterize the world even further. One of the most powerful moments of the TL is when famed Director Steven Spielberg is killed by Stormfront, with Saving Private Ryan dedicated to his memory and a number of other projects of his circulating around Hollywood in various forms. Brandon Lee has lived to become one of Hollywood’s biggest action stars, having stared in TTL Matrix movie (of which, there is only one) and another movie based on Metal Gear Solid. Kurt Cobain’s gunshot wound left him braindead, something which has affected rock music in ways even more than his OTL death. Television has seen a version of the West Wing with Sidney Poitier playing the President, and 24 with Charlie Sheen playing Jack Bauer. Other butterflies have seen Harrison Ford play Oskar Schrindler in Schrindler’s List, Russel Crowe land the role of Aragorn in Peter Jackson’s Lord of the Rings trilogy, Titanic going down as a box office bomb, and a grief stricken George Lucas handing the directing job for the Star Wars prequels to Sam Raimi.

Overall, the timeline does two things masterfully that next to no other AH works have achieved in terms of detail and plausibility – they made a successful modern third party, and a dystopian 1990s, and in the process showed just how close we could have had either. This timeline is rich, developed, often veers off in unpredictable directions, yet often funny or quirky, yet always worth a look and brilliant in ways – and after all, should a TL about Ross Perot be anything else? Give this masterwork a read if you haven’t already, and have a Happy Election Day!