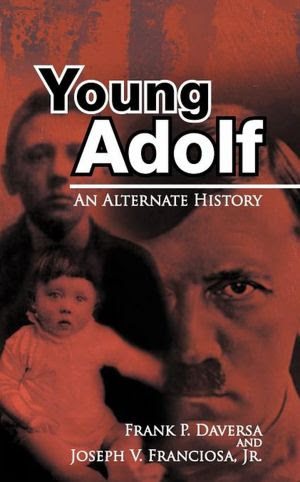 "Young Adolf as you have never seen him before…
Experience Adolf Hitler's childhood in striking detail. Witness his ordeals, from the rigors of his schooling to beatings by his father. Factual accounts are interspersed with fictional inventions, such as his relationship with a hypothetical girl named Helga. Can young Adolf conquer the personal barriers his difficult childhood presented and become close with her emotionally? How will that change him?
Learn more about Adolf the boy. Experience the molding of his dreams, his predjudices, and his desires in visceral detail. Come to understand the inner-workings of History's most infamous megalomaniac through the perspective of a child's eyes. Follow Adolf from birth to his late teenage years. Know the boy before he was the world's most feared man. Decide for yourself if Helga's influence might have altered the course of History."
This is how Frank P. Daversa and Joseph V. Franciosa, Jr. describe their collaborative effort, an alternate history biography of the youth and teenage years of Adolf Hitler. With roughly 120,000 words on 410 pages the authors describe in rich detail the family life and upbringing of the man who would later become the most infamous dictator of history. I'm no expert on Hitler and therefore can only with reservation judge which parts are fictional and which are factual, but to the best of my knowledge the book clings comparably close to the actual Hitler. Daversa and Franciosa dip into the hypothetical where blank spots remain to find reasonable explanations for attitudes and behaviors the real man would later show in his life, drawing a very real picture of how a teenage Hitler may have been: shy, yet forceful, passionate yet reserved, loving and caring yet full of loathing, physically weak yet able of staggering violence when pushed.

The point where the authors really divert from the historical Hitler is the invention of a love interest called Helga. First interested in her sister, their romance takes time to evolve, and is actually really well done in the book. Here, Hitler the dreamer, the soft-hearted, wins the upperhand over his inner demons, if ever so slightly. Still, in the end their love is doomed, but having fully experienced it leaves the young Hitler a different man.

"Young Adolf" leaves me with conflicted feelings. On the one hand, as the first part of my review should have suggested, it's a genuinely well-written and researched novel that offers the reader a window into Hitler's evolving mind and into the society and family that formed him. And for what it's worth, you get exactly what the book promises. And yet, after it put it aside I felt a somewhat uncouth question rise to foreground of my mind: so what?

It takes the book close to half its length to get to its POD. After that, it spends its time on courtship, on Adolf's family and friends, on his own desires and problems - but aside from the courtship angle, those others don't really seem be significantly affected. When all is said and done, his personality emerges (at least superficially, since we only get a sparse outlook after the climax) more reflective of his own shortcomings and vices.

I know that the novel took this line as its premise:


"Decide for yourself if Helga's influence might have altered the course of History."

As such, I can't really fault the authors for any lack of enthusiasm on my part. Nonetheless, as a reviewer I'm obliged to present my honest opinion of a book. In this case that would be as follows:

Young Adolf. An Alternate History is a well crafted and informative novel, but I suppose it just was not my cup of tea. I believe that as an alternate history novel it may have worked better for me if the authors had condensed the first 120 pages and offered a more definitive view on the changed Adolf's immediate future, maybe up till right after the Great War. All in all, I can still recommend Young Adolf. An Alternate History. It does offer insight into Hitler's personality and his formative years, and the Kindle edition is available for less than $5 at the moment. Give it a shot when you have the time.


* * *
War Blogger is the Internet handle of Sebastian P. Breit, author of the alternate history novel Wolf Hunt. You can find news, reviews, and commentary on all matters regarding WW2 on his blog, The War Blog, and follow his writing progress on his personal website.
Posted by Anonymous at 11:00 AM