Given my levels of patriotism that, on occasion, reaches near religious levels of devotion, my love of Balkanized America scenarios may seem a bit odd. While it may seem a tad hypocritical, getting to enjoy colorful and creative worlds and histories without actually having to live in them is one of the great boons of AH - why not enjoy it?

Of course, given the popularity of the trope, the large number of works featuring the shattering of the Union is hardly surprising, nor is the AHWU’s decision to dedicate a month toward examining such tropes. The variety of tales and timelines are nearly as diverse as the ways the Balkanization is achieved, and I will showcase a number of my personal favorites this month, beginning with IchBinDieKaiser’s timeline, America the Fallen.

Like a number of Balkanized America stories, it chooses to smash the United States to pieces at it’s fragile foundation. This ‘strangled-in-the-cradle’ approach typically involves the redcoats trouncing the rebels in the American revolution or avenging their defeat in 1812, but America the Fallen takes a different, and more plausible approach.

The fall of the Union begins with the attendees of the Constitutional Convention altered just slightly. George Washington chooses not to not attend as he is content to stay out of the public eye, Ben Franklin doesn’t attend due to ill health, and on the flip side, Patrick Henry does attend. The results of two of the cooler headed founding fathers absent from the convention, and the presence of one of the biggest Anti-Federalist firebrands comes with predictable results. The delegates fail to pass even a watered down version of the Constitution, allowing for the USA to remain in limbo under the Articles of Confederation.

This state of affairs would not persist long. Despite the best efforts of George Washington to preserve the union, it would not long outlive him upon his death from disease in 1789. Tensions between the states reach the breaking point, with the powder keg set alight by Virginia declaring it’s independence, and winning it on the battlefield. The peace treaty would serve as the nation’s death certificate, with the states south of the Mason-Dixon line all declaring their independence, and after a number of border conflicts, New York and Pennsylvania secede, leaving the Union reduced to what we know as New England.

As the dust settled, new nations formed from the bones of the old United States. Chief among them is the Commonwealth of Virginia, the most powerful and populous of these nations. Spanning from the Chesapeake Bay to the Mississippi River, with ambitions over the OTL Northwest Territory and Maryland/Delaware, it’s system of checks and balances and a three branched government would be familiar to most Americans, with the current leader Chief Executive Patrick Henry. To its south, you have the Carolina Confederation, which also includes OTL Tennessee, a plantation-based nation under the strong guiding hands of President Charles Pinckney, and to its south, a very British-influenced Georgia under Prime Minister William Few. In the North, you have a very centralized Maryland under President John Eager Howard that has just conquered Delaware and is contemplating Union with Virginia. A parliamentary republic has formed in Pennsylvania, with Chancellor William Bingham and President Thomas Mifflin overseeing Pennsylvania settling OTL Ohio and, along with New Jersey, find it’s place as the middleman between these nations. To the Northeast, after a number of wars, the region looks like it will either unify under the nationalist New York under Governor George Clinton or the remnant United States under John Adams. 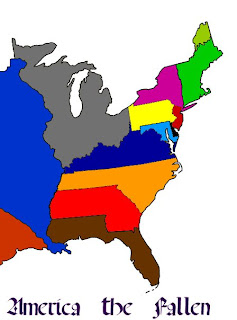 Outside the former USA, changes happen as well. In France, Louis-Charles has succeeded Napoleon as King Louis XVII, having bold plans for his nation even after it’s defeat in his predecessors wars. During the Napoleonic Wars, Louisiana gained it’s independence as a Constitutional Monarchy, with Louis XVII choosing his uncle Charles Philippe to rule it, and he was crowned Emperor Charles I of Louisiana. Similarly, Spain’s new world colonies would be split between Charles IV of Spain’s youngest son Francisco de Paula, Emperor of the Mexican Empire, and Charles’ oldest son Ferdinand ruler of the Kingdom of Antilles (Cuba, Puerto Rico, and Hispaniola). As you can tell, the world is shaping up quite richly, and IchBinDieKaiser hints that the future will see a host of other nations rise and fall in North America and elsewhere, as well as interesting events including Karl Marx playing revolutionary in a heavily German Texas, civil wars regularly shifting the borders of the southwest and Mexico between various peoples and factions, and a Native American nation rising in the north under a leader hinted to be Tecumseh.

The one downside to this vivid and magnificent TL is it updates rarely, mainly due to IchBinDieKaiser developing some of his other timelines. Nonetheless, he has crafted a creative host of nations that is fully enrapturing, resulting in a unique and fascinating Balkanized America scenario I hope he comes back to soon. Until then, I urge you to get acquainted with both versions of America the Fallen, both the original and the reboot. Until then, Sic Semper Tyrannis!

Soldier, scholar, writer and web-voyeur, Sean CW Korsgaard has been active in the alternate history community since 2006, and was recently elected to succeed Mitro as President of the Alternate History Online Facebook group. In addition to his contributions at the Alternate History Weekly Update, he writes for several websites, including his own, which can be found here.
Posted by Korsgaard at 12:01 AM