Review: "The Five Fists of Science" by Matt Fraction and Steven Sanders 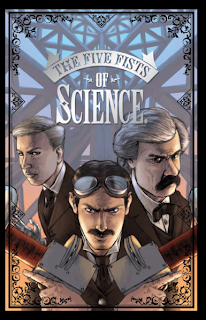 One of the conundrums of alternate history is how does one balance the "rule of cool" with the demands for plausibility.  Often when the author throws plausibility out the window it can hurt the story.  Yet there are times when an author fully embraces alien space bats plot device and creates something extraordinary.

The Five Fists of Science is a steampunk graphic novel created by writer Matt Fraction and artist Steven Sanders.  The novel follows a crime-fighting Nikola Tesla, a broke Mark Twain and younger-then-she-ought-to-be Bertha von Suttner as they team up to bring about world peace through superior firepower. Before the story even begins we are introduced to Mark Twain who breaks the fourth wall by assuring us that this story is true, only that everything has been changed.  Release the alien space bats!

The plan is simple: convince the nations of the world to buy Tesla's new secret weapon.  With everyone owning the most powerful weapon ever invented, the likelihood of war would be greatly diminished. When the world leaders do not buy it, Twain comes up with a hoax to better sell the weapon.  Fights are staged in New York between "monsters" created by Tesla's own science, which are defeated by Tesla's weapon.  Twain is on hand to boast about the weapon to the grateful citizens.

Dark forces, however, seek to prevent our good-intentioned team from ensuring world peace.  Yeti-hunter Thomas Edison, dark wizard John Pierpont Morgan, sinister Andrew Carnegie, and nervous-eater Guglielmo Marconi are working together to build a bizarre new skyscraper, named the Innsmouth Tower, on whose building site many construction workers have already died in mysterious accidents.  All this leads to a climatic battle-scene between science and magic.

While the personalities of the villains may have been tweaked, Twain's humor and Tesla's quirks were effectively captured and Bertha worked well as the cliche hot steampunk girl.  Plausibility hounds, however, may not enjoy the amount of liberties taken with the source material.  Furthermore, though the story was entertaining, the artwork was very dark.  To dark even, there were times where I had to squint to figure out what was going on.  Nevertheless, seeing some of my favorite historical figures do battle with one of the classic figures of horror is enough for me to recommend The Five Fists of Science to anyone looking for a good alternate history comic.
Posted by Mitro at 11:00 AM