Review: 'What if?' series by Robert Cowley

Like a couple of the other writers for the site, for my latest article, I decided to take a look back at what got me into alternate history in the first place.

While I don't remember the year exactly, I was just entering my teenage years and had just reached the tail end of spending the summer with my grandparents. My grandmother had taken me to the Terre Haute Books-a-Million so I could pick out a book for the long drive home to Virginia, and I was wandering about in the history section when a certain book caught my eye. Titled 'What if? by Robert Cowley, and boasting the tag line 'The World's Foremost Military Historians Imagine What Might Have Been', it immediately caught my eye being both an inquisitive and historically-obsessed child. I couldn't have found a more perfect fit for me book wise, and convinced my grandmother to buy it and the nearby sequel for me. I'd breezed through both of them by the time we'd reached my parents home in Virginia, provided the base of what would become my love of alternate history, and the rest as they say, is history. So here I am, close to a decade later, taking a look back at the pair of books that provided my first taste of the AH genre, and then reviewing them for your reading pleasure. 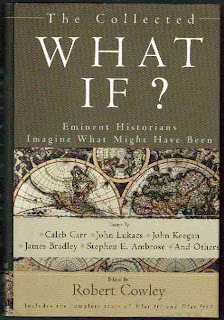 The 'What if?' series, which includes 'What if?', 'What if? 2' and 'What ifs? if American History' is a collection of essays collected and edited by Robert Cowley, with contributions coming from authors including David McCullough, Stephen E. Ambrose, James M. McPherson, Caleb Carr and Cecelia Holland. These historians each wrote an essay concerning a historical event, and how things might have turned out had history gone differently. These cover the more conventional PODs concerning the Civil War and WWII, but quite a few cover lesser used or genuinely creative ideas, with examples including the Mongol Invasion of Europe, Jesus Christ not being crucified, the USA and Great Britain going to war in 1896, and even what civilization would have been like without the widespread cultivation potato. As you would expect, the result is a very diverse and intelligent look at worlds that might have been.

The anthology itself various in style and approach from essay to essay but all are of a consistent high quality, and all are genuinely intriguing and enjoyable. Unlike a great deal of existing AH literature out there, What if? takes an intellectual approach to the various examined PODs, and while that analytical and academic approach might turn off folks expecting something a tad more entertainment oriented, I felt it helped to give many of its various essays a more broad appeal, to say nothing of providing an extraordinary resource to those writing AH fiction. The end product consist of a set of well written, well researched and ultimately entirely plausible glimpses into divergent histories.

Overall, the what if series is unlike almost any other set of work in the alternate history genre. Its choice to examine a diverse set of scenarios and to look at them from a scholar's perspective is a feat that I have yet to see replicated, and provides the anthology an air of credibility, all the while remaining entertaining. For genre newcomers, it makes a superb entry point, and for long time AH veterans, it makes an excellent reference guide. Regardless if you are new or experienced, the What if? series proves to be one of the rare serious academic looks at alternate history, one made all the better by the high-level of content quality.

The What if? series is a must read for anyone with an interest in alternate history, and for those who lack that interest, perhaps it will kindle that interest in you like it did for me. In either case, I cannot recommend the series highly enough, and urge you to pick up a copy at once.

Soldier, scholar, writer and web-voyeur, Sean CW Korsgaard has been active in the alternate history community since 2006, and was recently elected to succeed Mitro as President of the Alternate History Online Facebook group. In addition to his contributions at the Alternate History Weekly Update, he writes for several websites, including his own, which can be found here.
Posted by Korsgaard at 9:28 PM