Review: The Tears of the Sun 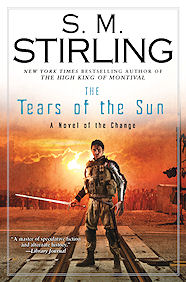 In The Tears of the Sun, Rudi Mackenzie, now Artos the first High King of the Kingdom of Montival, must fulfill the prophecy first spoken by his mother Juniper at his wiccaning. He wields the Sword of the Lady crafted for him by the gods whose war in heaven has spilled over onto Earth, which twenty five years ago lost the ability to use high technology due to an event known as the Change (which happened right after the island of Nantucket was sent back to the Bronze Age). He has forged a string of alliances from across the continent, including with the King of Norrheim, the Regent of Iowa, the Seven Council Fires of the Sioux and the youngest son of the murdered General-President of the United States of America (Boise). He has won the heart of the woman he loves, Mathilda Arminger, whose father was Norman Arminger who was killed during the War of the Eye by Rudi's father Mike Havel, the Bear Lord. And now he must defeat the forces of the Church Universal and Triumphant, led by their evil Prophet Sethaz, who is also the son of the Unabomber.

Confused?  Am I making this all up?  Well if you know what the hell I am talking about then you are a fan of the Emberverse series, written by S. M. Stirling.  If you are a not a fan, however, than this novel is not for you.  This series, if you include all the books that stem from the event that happened over Nantucket in 1998, involves 11 published novels, 5 published short stories, 2 planned novels and numerous online appendixes.  There is also a rumored share world anthology, webcomic and television series.  To make this world even larger, some of the fan fiction is actually a part of the canon!  There is just way to much content for anyone to start here, you will be lost and the book will be worse for you.

Yet fans will be disappointed as well.  Rudi, despite being the main character of the current series, has a very minor role in this novel.  He even acts more like a cliche "good king" instead of the adventurous witch boy we have known since The Sunrise Lands.  Half the novel Stirling uses to reintroduce characters you should already know pretty well if you have lasted this long with the series.  Along with that are some flashbacks involving the strange case of Mary Liu (which incidentally finally answered the question about what happened to Odard's servant Alex at the end of The Sunrise Lands) and a black ops mission in Boise.  Put it all together and the novel reads more like a collection of short stories set in the Emberverse universe, all setting up what should be the major battle in the upcoming sequel Lord of Mountains (I would say "climatic" and/or "final" but there is another novel after that).

Still it was fun to revisit characters I have not seen in over a year and the ending of the novel promises us something spectacular next year.  Perhaps this novel's major flaw was that it was only half of what it was supposed to be, since Stirling split the original manuscript to create Lord of Mountains.  Though in hindsight that may not have been wise for the sake of this novel, the book is still a good read for fans of the universe.  For those who have not visited the Emberverse yet, go pick up Dies the Fire before checking this book out.
Posted by Mitro at 11:00 AM

Email ThisBlogThis!Share to TwitterShare to FacebookShare to Pinterest
Labels: Book Review, Stirling, The Tears of the Sun