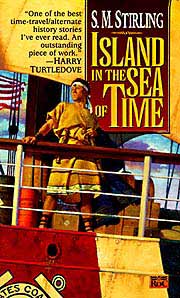 ISOT (pronounced "eye-sot") is an acronym for the plot device used both in published and online alternate histories.  The term originated from S. M. Stirling's 1998 novel Island in the Sea of Time, the first of the three alternate history novels known as the Nantucket or Islander trilogy.  The novel describes the events following "The Event", which transported the island of Nantucket, its inhabitants and a nearby United States Coast Guard ship Eagle to the 1250s BC.

Following the publication of the novel, the term began to appear in many online discussion groups, probably the earliest being the alternate history newsgroup soc.history.what-if.  ISOT became a verb meaning "to move a large area of land through time to another era".  Though ISOT often stands for the title of Stirling's novel, it also has been defined to mean "Island Sea Of Time" and sometimes "In Sea Of Time".  The term also references the event which cased the time travelling, if the author uses another name for the event.  Due to the implausibility of such an event, it usually appears in the ASB section of many online forums.  There also exists an online role playing game which has run continuously since 2000 called SHWI-ISOT with a POD in 1800.  Players act as characters sent from the 21st century back to an alternate early 19th Century.

The ISOT plot device does not apply solely to travel through time.  In 2000, Eric Flint published 1632, the initial novel in the shared world series (also known as The Assiti Shards series). The premise involves a the fictional American town of Grantville, West Virginia being sent back to April 1631 in the middle of the Holy Roman Empire during the Thirty Years War (caused by an event known by the characters as the "Ring of Fire").  This reader learns in a prologue about the alien Assiti who can be blamed for removing Grantville to the past because their "artwork" often alters time and space.

In both series, the event transports the land Nantucket and Grantville replaced to the present day.  The geographical location transported to the present rarely makes an impact to the story following the switch and can be ignored.  The setting for Stirling's Emberverse series, however, involves the same timeline Nantucket of the Nantucket series originated from.  In the series the Bronze Age Nantucket causes an event known as the "Change" which alters the laws of physics to prevent the use of high technology (with disastrous consequences for humanity).

Unlike the other famous term popularized by alternate historians, alien space bats, ISOT has yet to appear in any published literature.  The term alien space bats has appeared in many novels (Dies the Fire, Without Warning, Outrageous Fortunes), but not ISOT.  Perhaps the absence of the term can be explained by the lack of people who have actually read Island in the Sea of Time or visit online alternate history forums. Meanwhile, the term and proper use of "alien space bats" can be appreciated without ever reading another novel.

Despite originating as a device to move land masses and their populations to other time eras, the term has evolved to cover time travel by a single or multiple individuals without the need to move large land masses.  This evolution actually makes sense since time travel and alternate history have long been intertwined with each other before Stirling published his novel  The time traveler s) create a new timeline due to their actions in the past. Authors rarely state what happened to the original timelines, but readers usually assume it exists parallel to the new timeline created by the traveler(s), as I tried to express in my Back to Multiverse series of posts. 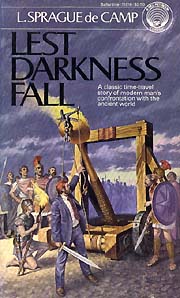 L. Sprague de Camp's 1939  can be credited with writing one of the influence alternate history/time travel novel: Lest Darkness Fall.  The novel influenced many alternate history authors who began their careers in the 1980s, including S. M. Stirling.  In 2005 he published the short story sequel to Lest Darkness Fall: "The Apotheosis of Martin Padway".  The story provides glimpses of what might have become of the reality Padway altered.  Pehaps de Camp deserves some credit for creating the ISOT plot device, since Stirling may never have wrote the novel which gave the plot device the name if he had never heard of the time travelling Padway.

ISOT can be applied to travels to the future.  In Harry Turtledove's 1987 novel The Misplaced Legion, a Roman legion and Celtic prince from the Gallic Wars (58-51 BC) accidentally transport themselves and a Roman legion to a parallel, fantasy universe modeled after the 11th century Byzantine Empire.  While continents and naturals laws may be different, the story nevertheless provides an example on how people from the past can effect people from their future.

This brings us to a major criticism of the ISOT plot device: most ISOT stories can too easily become wankfests.  As expressed in Max's First Law which states: the greater the technological and social advantage of the changed societies in question, the greater the wank.  The creator of the law lists three reasons why an ISOT story can become a wank:
When considering those factors, having an ISOT becoming a wankfest makes a certain kind of sense.  Dr. Gregory Guzman, my favorite history professor, said when an advanced culture comes in contact with a primitive culture, the less advanced culture will give way to the more advanced culture.  Thus, from one point of view, the Nantucket of Stirling's Nantucket Trilogy could plausibly manage to create the beginnings of a global empire by the end of the trilogy.

Nevertheless, people have objected to this tendency to become a wankfest as "time-ism", or the irrational belief of the inherently superiority of people from the future compared to people of the past.  This anti-time-ism theme appears in both the 1632 series, Harry Turtledove's 1992 novel The Guns of the South and several online alternate histories.

Despite the criticism, however, the plot device remains popular in the alternate history community and will probably remain so for some time.

Matt Mitrovich is the founder and editor of Alternate History Weekly Update and a volunteer editor for Alt Hist magazine. His fiction can be found at Echelon Press, Jake's Monthly and The Were-Traveler. When not writing he works as an attorney, enjoys life with his beautiful wife Alana and prepares for the inevitable zombie apocalypse. You can follow him on Facebook or Twitter.
Posted by Mitro at 10:55 AM