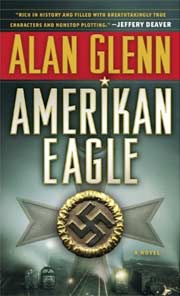 Amerikan Eagle by Alan Glenn, pseudonym for Brendan DuBois, is a murder mystery set in 1943.   In this world Franklin Delano Roosevelt was assassinated in 1933 by Giuseppe Zangara in Miami, taking the bullet that killed Anton Cermak in OTL.  In 1936 Huey Long becomes president and turns the United States into an isolationist, fascist, one-party dictatorship.  By the time the events of the novel take place, the Soviet Union is the last nation fighting Germany, the United Kingdom having long since surrendered with Winston Churchill in exile.
The main character is Sam Miller, a probationary inspector working for the police department of Portsmouth, New Hampshire.  Desperate to support a family, he pays lip service to the current regime to ensure he keeps his job and does not join the increasing unemployed masses, or worse, end up in a labor camp. Like most murder mysteries, the story starts with the discovery of a dead body.  Found by the railroad tracks, this body has no identifying marks except a number tattooed on the victim’s wrist. Sam is discouraged almost immediately by his superiors from looking too deeply into this case, but not wanting to drop his first murder case, he ignores their warnings dives deeper into the case.  Not only does he discover that his family and friends have been living secret lives, but he also uncovers a global conspiracy that would put the lives of millions of people at risk if discovered.  To make matters worse President Long will be meeting with Hitler himself in Portsmouth to sign a new treaty of trade and friendship.
I was sadly disappointed by this novel.  It began just like DuBois' last alternate history novel, the Sidewise award winning Resurrection Day.  In both novels, the main character is a good guy (with a dark secret) who is just trying to do his job in a United States that is far from a democracy (with plenty of 1984 references thrown in for effect).  Discouraged by the powers at be at every turn, the main character nevertheless ends up solving the mystery and uncovers several conspiracies in the process.  Perhaps that is why DuBois used a pseudonym, since he did not want people comparing this novel with his last novel-lengthed work of alternate history.
While the ending of this novel was not as uplifting as Resurrection Day, it nevertheless tried to wrap everything up while leaving the reader with hope for this alternate timeline.  This hope, however, seems unrealistic and the reader is left shaking his head at the naivity of Miller.  Still I guess it is better than a more depressing, but realistic, ending the reader would have got instead.
The point of divergence and the events thereafter also are implausible.  Despite DuBois' explanation at the end of the novel, I just do not believe that Americans would be willing to ignore the more than century long history of democractic government.  Even if the Democrats of the 1930s are vastly different from the Democrats of today, it is hard to believe they would become transformed into the Nazis so quickly.  The Great Depression, while a traumatic time period for most Americans, would have to be a lot worse to lead to a United States that was willing to ally itself with Axis powers.
I will give DuBois points for at least crafting a compelling dystopia with some present day references scattered throughout the novel that allows the reader to make comparisons between our current history and this one, but as a plausible atlernate history this book failed to live up to my expectations.
Posted by Mitro at 8:33 PM