Let me begin by thanking Mitro for both running a fine site here, and taking me on board as a contributor for it, and let me follow that with introducing myself. My name is Sean CW Korsgaard, or simply Korsgaard, and for now and hopefully many more articles to come, I will be your master of ceremonies.

With personal thanks and introductions aside, I would like to introduce you, my dear readers, to one of my more recent alternate history favorites, the masterful Dominion of Southern America, written by Glen of alternatehistory.com.

The timeline begins with what would seem like a fairly minor POD: the swapping of two colonial governors in British North America, Josiah Martin and Guy Carleton, whom are appointed to Quebec and North Carolina respectively (in OTL, they each went to the other). But like most small changes, it soon reaps major consequences for while Carleton's cool-headed negotiations and granting of concessions to the colonists keeps North Carolina loyal, Martin's heavy handed approach plants Quebec firmly in the rebel camp. The end result, is following the American revolution, the newly formed USA gains control of what we know as Canada, while the British keep control of everything south of latitude 36-30, what would become the Dominion of Southern America. From here, the timeline blooms into an entirely different world. 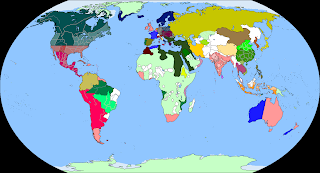 The namesake Dominion of Southern America in this world has become the premier British settler colony in this world, much like Canada in our own, and yet remains quite different from Canada and the OTL South. Like the OTL South, much of the economy is dependant on tobacco and cotton plantations, though with British support the economy eventually diversifies, including such oddities as tea cultivation in South Carolina and diamond mining in Arkansas. As you might expect, this leads to a brief, yet important conflict known as the Slaver Uprising, though the 'Confederation of Southern America' is almost immediately crushed. The result of the war was both the abolition of slavery and the formation of the Dominion of Southern America. Culturally, the Dominion has a very stratified system of social standing, with the Loyalist planter families and British officials at the top, the middle class made up of traders and small farmers, as well as members of the Five Civilized Tribes, the lower class made up mostly of the recently freed black slaves, and the very bottom made up of imported workers from India which replaced the slaves. Territorially, the Dominion consists of the OTL American South and much of the Caribbean, and despite the best efforts of Andrew Jackson to keep it independent, Texas was willingly annexed, adding much of the Southwest to the DSA, as well as access to the Pacific. Despite Americans taking advantage of the Slaver Uprising, mainly by selling weapons to both sides, Britain and the Dominion are very close with the USA, both enjoying a friendly rivalry with their northern neighbor. As a whole, the DSA is a diverse and unique nation that promises, much like it has been so far, unlike anything seen in the genre so far. 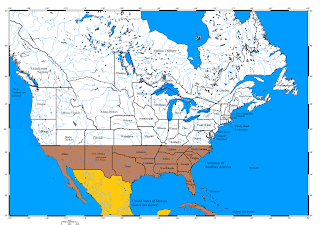 As you might imagine, the USA is just as effected by this change as the DSA. From the start, the USA of this world begins to walk a different path from ours. Slavery is abolished almost immediately after the signing of the Constitution, and the free black citizens are for the most part just as free as their white counterparts, fixing one of the OTL USA's great early hypocrisies. Religiously, most of the nation is either Catholic or Diest, which has itself grown into quite a movement, eventually splitting into two very different branches of Diest Christianity, and recently has caused the formation of Diest Buddhism. Territorially, the USA has grown to encompass all of North America above the border with the DSA, which over time was peacefully extended across the same 36-30 line it began with. States are being carved slightly differently than our own, and even Washington DC is placed differently, lying in the area around what we know as Kingston, New York. Diplomatically, the USA has become active in the global community far earlier, having since the time of Napoleon enjoyed a very warm relationship with Britain, and is revered among the world's many growing democracies, with several modeling themselves after the young republic. As a whole though, the POD resulted in a nation which has lived up to its principals far better than OTL, and still managed to grow from sea to shining sea.

In time, the entire world grew to be effected by butterflies. A stable, democratic Mexico controls the whole of Central America. In South America, the former Spanish colonies all united under either Gran Columbia or the United Provinces of South America, while Brazil balkanized into several separate nations, one of which remains a colony of Portugal. Europe, ravaged by several revolutions in the 1840s, plays home to a united Scandinavia, a still divided Italy, a Prussia-less united Germany, and curiously enough, the Kingdom of Prussia-Poland. Australia and New Zealand are cleanly divided between Britain and France, and Japan was divided into Russian and British spheres of influence following a prolonged civil war. Most recently, a civil war left China divided between a Qing remnant state in Manchuria, A new Han-ruled Chuen Dynasty in northern and western China, and most interesting, a democratic United States of China in the south. Considering the TL has only reached 1870 so far, there should be no shortage of future opportunities to make this world even more vivid.

As a whole, the timeline was from the very start been a creative, well researched, and well written timeline, one where the world which is forming within grows more and more interesting with every passing update. Glen has done an amazing job crafting this world, yet always remaining plausible and you never know what to expect to happen next. So if this increasingly unique world where the a simple swap of leadership changed everything sounds like something you'd like to read, here is Part I, Part II and Part III, and if you'd like to have a hand commenting and contributing, click here. I hope you enjoy following its progression as much as I do!

Soldier, scholar, writer and web-voyeur, Sean CW Korsgaard has been active in the alternate history community since 2006, and was recently elected to succeed Mitro as President of the Alternate History Online facebook group. In addition to his contributions at the Alternate History Weekly Update, he writes for several websites, including his own, which can be found here.
Posted by Korsgaard at 12:29 AM