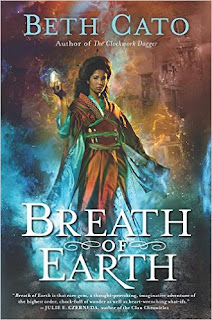 The pitch line for my new book Breath of Earth is pretty straightforward: "1906 San Francisco with geomancy and not-so-mythological creatures. Spoiler alert: there's an earthquake." I can't hide the fact that the earthquake happens--the date, the setting, and the cover give that away--and I'm fine with that. The cause of the quake is quite different from our reality.

This is a world where the American Civil War ended early due to an alliance between the Union and the steam-powered forces of Japan. In 1906, they are a world power dubbed the Unified Pacific, and in the process of dominating China. Much of their military might arises from geomancy. Geomancers act as a buffer during earthquakes as they pull in energy that otherwise would cause the earth to shake. That energy is then transferred into rare rocks that are used as batteries in everything from airships to flashlights.

San Francisco is a safe place thanks to the presence of the Cordilleran Auxiliary, a boarding school and base of operations for geomancers along the Pacific coast. After a disaster befalls the auxiliary on April 15th, Easter Sunday, the novel builds up suspense leading up to the day and time that the earthquake actually happened: the 18th, at sunrise.

One of the most famous incidents around the real earthquake is the opera Carmen performing on the night of the 17th, with the world-renowned tenor Enrico Caruso as Don Jose. I include the opera, but with a twist. I bring in a performance of a controversial opera, Lincoln, which celebrates the late president's Emancipation Proclamation and his late-life work on behalf of Chinese refugees. Abraham Lincoln lived to a ripe old age in this timeline.

The actual earthquake provided such a wealth of data that it was difficult to decide what to include. Even with the magic twist to the plot, I still use important places such as the epicenter at Mussel Rock and the presence of large cracks in the earth to the north of the Bay. San Francisco itself became a scene of horror, one that is well-chronicled in photographs, journals, and early film work. The earthquake knocked down a wide swath of downtown, and to make things even more devastating, broke both water mains and gas lines. Survivors trying to cook breakfast accidentally caused gas to alight, and firefighters could do little to contain any blazes throughout the peninsula. I incorporated many of these details--with the addition of a blue miasma of escaped energy forming an eerie fog throughout the city.

When it came to the actual feel of the earthquake, I didn't need to rely on books. I'm a native Californian. One of my earliest memories is being three-years-old and in the bathtub when a quake devastated nearby Coalinga. Tremors caused water to splash out of the tub on its own. I felt many more earthquakes as I grew up, included the last major quake to hit the Bay Area in 1989. I lived over two hundred miles away, but the feel, the rumble, was distinct.

It's that personal connection with earthquakes that inspired me to write Breath of Earth and look deeper into the history of my home state. It's my hope that readers will be inspired to read more about the actual earthquake, too. To that end, I include my research bibliography in the back of the book and on my website.

The book may be fantasy, full of magic and incredible creatures, but the foundation is firmly built on actual history, spoilers and all.

More about Breath of Earth: http://www.bethcato.com/breath-of-earth/

Beth Cato is the author of the Clockwork Dagger series from Harper Voyager, which includes her Nebula-nominated novella WINGS OF SORROW AND BONE. Her newest novel is BREATH OF EARTH. She’s a Hanford, California native transplanted to the Arizona desert, where she lives with her husband, son, and requisite cat. Follow her at BethCato.com and on Twitter at @BethCato.
Posted by Mitro at 11:00 AM