I didn't plan this. Seriously, I did not plan to feature a another map by Rebecca Stirling set in the same timeline. It just sort of happened, so don't yell at me. Anywho, here is the map: 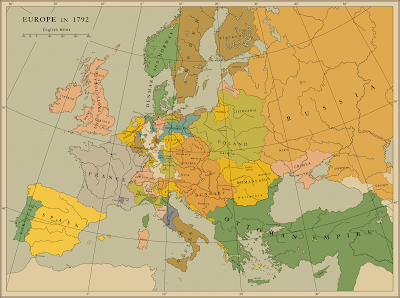 This is "Europe in 1792" by the aforementioned Rebecca Stirling and it is from her timeline, "The Faraway Kingdom" (which I still haven't read yet). Personally I wished I had a better name to give this map. One that more captures the alternate reality that it represents, rather than the unimaginative "continent in year" title I had to give it. For all I know, Rebecca does have a good name for it, but I couldn't find it.

Back to the map: its great. It looks like a map I would have seen in a history textbook. I like the super Romania and the Crimean Khanate that is still around (in our timeline it would cease to exist in 1783). Also, I would like to learn more about the "United Protectorate", but I guess I would need to read the timeline to do that. In summary, its an awesome map by an awesome alternate cartographer, who I think may be the first person to have back to back appearances on Map Monday (although I am too lazy to check if that statement is true).

Honorable mentions this week go out to "Socialist Federal Republics of the Danube" by Nihht, "Red Skies" by Rvbomally and Zombie Russia (the 'Ruswamp') by theSuricateProject.