Map Monday: Colonisation of the Japanese Archipelago by Rubberduck3y6

In our timeline, Japan managed to maintain its independence even as the European colonial powers were gobbling up as much territory as possible. But what if it had succumbed to European territorial ambitions? 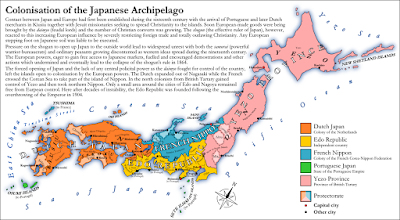 This is the "Colonisation of the Japanese Archipelago" by Rubberduck3y6. In this world it seems that the Tokugawa shogunate ended four years earlier due to a failure to modernize and European pressure. The Dutch, British and French all carve out spheres of influence, but a small area around Edo and Nagoya managed to maintain its independence before kicking out the Emperor and declaring a republic. Otherwise information about this alternate history is scarce.

There is a brief mention of "British Tartary". Wikipedia tells me that Tartary refers to territory in between the Ural Mountains and the Pacific Ocean. How the Hell did the British get there? Sadly I couldn't find any additional information on this timeline so I can only speculate about how such a place came to be. Otherwise the map is nice looking and the text doesn't have any major spelling and grammar issues. Good job, Rubberduck3y6.

Honorable mentions this week go out to "A Different Reality In These Splendid Islands" by Gian, "The Kingdoms of North America" by Zek Sora and "The Continent of Europe in 1450 AD shortly before the voyages of Nicklas Lund" by Rebecca "Upvoteanthology" Stirling.