There seems to be a fad to redesign flags using the Japanese Rising Sun flag. First we saw the "US Imperial Naval Ensign" by Hellerick, then there was the "Flag of the United Kingdom of Great Britain, Northern Ireland, and Japan" by Reesetelford9 and then there is this: 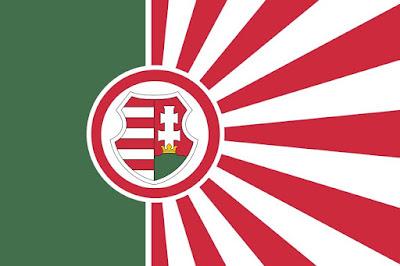 This is "Rising Sungary" by Euthyon (I'm assuming the pun was intended) and it features Hungary's coat of arms and the colors of its flag, but it includes the rays we all know and love from the Rising Sun flag. Euthyon mentioned in the comments that this was inspired by another flag with a similar design created by NothingDotCom. Admittedly I like this flag better since the colors aren't as hard on the eyes. All and all a good flag.

Is there, however, a story? No, not really. This is definitely mash up of existing flags and not something meant to go with a specific timeline. Still I remember in the long, long ago reading an odd timeline where the Bolsheviks lose the Russian Civil War and Russia collapses into smaller states. Slowly but surely Japan expands across the former territory of Russia with their hordes of Chinese conscripts before invading Europe. Can't remember the name of the story, but I could sort of see this flag being used by a Hungarian puppet state of Japan.

Which timeline do you think this flag belongs to?