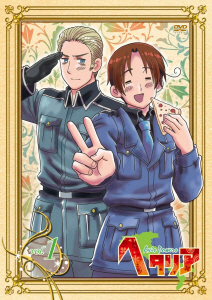 So today I'm going to be reviewing the anime Hetalia. The series began its life as a popular webcomic by Hidekaz Himaruya, but it didn't take long for it to receive an anime adaptation. The series is a lighthearted and humorous retelling of various world history events with the nations of the world anthropomorphized as humans. Originally the focus of the series was on the Axis Powers and their on-going struggle against the Allies. Hetalia has since moved beyond World War II and has focused on other historical events and nations.

Some of you probably think that this sounds kind of similar to Polandball. I suppose that's more or less true, but there's a couple of things you ought to keep in mind. First of all, Hetalia did come first, but it's hardly the first series to feature anthropomorphic nations. Second, and far more importantly, do not under any circumstance compare the two to each other. While there are fans of both Hetalia and Polandball, for the most part the fandoms tend not to play well together. All I'm saying is tread carefully when discussing Hetalia and Polandball in the same forum thread.

Now then, let's talk about the series itself. There really isn't any overarching plotline to speak of. Certain historical periods do tend to get more episodes than others, but overall the series is just as episodic as the webcomic that inspired it. Each episode clocks in at about five minutes if you count the intro and credits. So if you're short on time, or have a short attention span, then Hetalia should suit you quite well.

The characterization of the various nations are, in large part, based upon Japanese stereotypes of those nations. As a result we have Italy, rather than France, as the one who's cowardly and quick to surrender. It's all meant in good natured fun and isn't meant to be offensive or taken too seriously. Even Japan gets in on the fun, being portrayed as a shut-in who takes way too many pictures while on vacation. In fact most viewers tend to find the depiction of their home nations absolutely hilarious.

Hetalia may be a comedy series, but it does know how to be serious when the occasion calls for it. The most notable example of this episode that involves the American Revolution. Rather than a glorious struggle for independence it is portrayed as a tragic parting of ways between America and England. It packs even more of an impact when we see how England was like a big brother to America during America's younger days. Admittedly, the American Revolution episode was hyped to hell and back, which killed a bit of its impact. That being said, it still is easily one of the most powerful episodes of the whole series.

In general, though, Hetalia keeps things on the lighter side and tends to stay away from topics that are too serious or controversial. Himaruya has stated that this is why Mexico has yet to have an on-screen appearance. Curiously though, Cuba, who arguably would be more controversial, has appeared on a couple of occasions. Germany does feature prominently in the World War II segments, but he's never depicted as subscribing to Nazism and he isn't exactly fond of his boss Hitler.

The historical and cultural references are very well researched. Don't worry about missing out on any of the jokes or references. The anime has several text pop-ups that explain things in great detail, and the webcomic has little notes that also provide explanations. In fact, Hetalia's one of the best researched anime with regards to European History and history in general. If you're not careful you might just learn something new.

The gender balance of characters is skewed towards the male side. Himaruya admits that this is largely because he had trouble drawing female characters when he first started the webcomic. You might think this would hurt Hetalia's popularity with the female demographic, but you'd be quite wrong. As a matter of fact women make up the majority of Hetalia fans, and there's also a strong LGBT fan base.

In other inspirations we have the webcomic Planetary Moe. It's basically Hetalia but with celestial bodies rather than nations. In fact, some of the character designs are similar to Hetalia designs. I've only recently found out about this one so I can't say much. I can say, from what little I've seen, it looks like a pretty good webcomic. It can also be found on Deviantart.

I thought that the English dub was quite excellent as well. I can't imagine anyone other than Todd Haberkorn as Italy or Eric Vale as America and Canada. Though Vic Mignogna, who was eventually cast as Greece, gave some very admirable auditions for Italy and America. J. Michael Tatum gave such a good performance as France that I almost didn't realize that it was him.

Well there you have it. Hetalia: it's funny, it's educational and it's a whole lot of fun. It's a series that I enjoy quite a bit and I'm sure you will to. Well that does it for now. I've got a very special edition of The Audio File for next time, so that's something to look forward to. I will see you guys next time.