The prequel tales for the acclaimed feature film, JLA: GODS AND MONSTERS is here! In this alternate universe where Superman is Zod's son, Batman is a vampire and Wonder Woman is a descendent of New Genesis, J.M. DeMatteis and Bruce Timm take the Justice League to a new level. Featuring the trinity's origin stories that serve as prequels to the animated film!

The Lost Time Accidents: A Novel by John Wray 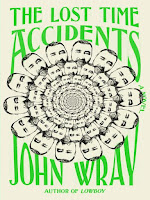 In his ambitious and fiercely inventive new novel, The Lost Time Accidents, John Wray takes us from turn-of-the-century Viennese salons buzzing with rumors about Einstein's radical new theory to the death camps of World War Two, from the golden age of postwar pulp science fiction to a startling discovery in a Manhattan apartment packed to the ceiling with artifacts of modern life.

Haunted by a failed love affair and the darkest of family secrets, Waldemar 'Waldy' Tolliver wakes one morning to discover that he has been exiled from the flow of time. The world continues to turn, and Waldy is desperate to find his way back-a journey that forces him to reckon not only with the betrayal at the heart of his doomed romance but also the legacy of his great-grandfather's fatal pursuit of the hidden nature of time itself.

"SCIENCE. BAD."
What if the research and development department created to produce the first atomic bomb was a front for a series of other, more unusual, programs? What if the union of a generation's brightest minds was not a signal for optimism, but foreboding? What if everything... went wrong?

The adventures of Lewis & Clark continue! Venturing deeper into the heartland, the expedition discovers another arch, which can only signal new trouble — and monsters — thriving in the wild. Meanwhile, Sacagawea experiences complications with her pregnancy.

What If? Infinity by Joshua Williamson

Marvel once again poses the question, "What If...?" What if THANOS joined the AVENGERS? What if the INHUMANS took over Earth? What if the AVENGERS lost the war? What if the GUARDIANS OF THE GALAXY found out the ILLUMINATI were hiding Thanos? What if NORMAN OSBORN had the INFINITY GAUNTLET?!