Legacy of Kings by Eleanor Herman

Imagine a time when the gods turn a blind eye to the agony of men, when the last of the hellions roam the plains, and evil stirs beyond the edges of the map. A time when cities burn, and in their ashes, empires rise.

Alexander, Macedon's sixteen-year-old heir, is on the brink of discovering his fated role in conquering the known world, but finds himself drawn to a newcomer…

Katerina must navigate the dark secrets of court life while keeping hidden her own mission: kill the queen. But she doesn't account for her first love…

Jacob will go to unthinkable lengths to win Katerina, even if it means having to compete with Hephaestion, a murderer sheltered by the prince.

And far across the sea, Zofia, a Persian princess and Alexander's unmet betrothed, wants to alter her destiny by seeking the famed and deadly Spirit Eaters.

Weaving fantasy with the shocking details of real history, New York Times bestselling author of Sex with Kings Eleanor Herman reimagines the greatest emperor the world has ever known, Alexander the Great, in the first book of the Blood of Gods and Royals series.

FUBAR: By the Sword by Chuck Dixon, Jeff McComsey and Michael McDermott

From the castles of medieval England to the unstoppable armies of Genghis Khan, these 25 tales of zombie-stabbing action traverse the histories of the ancient world before the machinery of modern combat was perfected. These were brutal times when you either LIVED by the sword or DIED by the horde!

The Spear of Lugh, one of the four Kingly Hallows of Ireland is in Chicago. And everyone, everyone wants it, for it is said that he who carries the spear into battle cannot be defeated. Among those who seek it are an agent of the infamous Wild Hunt; a mobster who knows far more about these things than he should; and of course both the Seelie and Unseelie Courts – the last people PI Mick Oberon would want getting hold of the spear...

"Science seeks knowledge! Let the knowledge lead us where it will, we still must seek it! To know once for all what we are, why we are, where we are, is that not in itself the greatest of all human aspirations?" - Professor G. E. Challenger, When the World Screamed

Brilliant, belligerent and bearded in equal measure, incapable of suffering fools, or journalists, gladly, the greatest scientific mind of his generation - Sir Arthur Conan Doyle's Professor George Edward Challenger - returns in ten all-new tales of scientific adventure and wonder. He is the discoverer of The Lost World, the prophet of The Poison Belt, the destroyer of The Disintegration Machine, and the man who made the World Scream! Who can deliver mankind from the shackles of ignorance? Who else but that great self-proclaimed champion of science? We give you, ladies and gentlemen, children of all ages, the one, the only, Professor George Edward Challenger!

This original anthology, from the authors and editors who brought you the Gaslight Sherlock Holmes series, sees Challenger and his stalwart company including the reporter Malone, big game hunter Lord John Roxton and the skeptical colleague Professor Summerlee, travel across space and witness the ravages of time, narrowly eluding a dinosaur's bite only to battle against the invasive red bloom of alien foliage, then plunge deep into the mysteries hidden within the Earth and reach out to the moon and into the heart of the unknown. Strap yourself in for chills, thrills and challenges to the unknown in exciting new worlds and lost places with literature's foremost scientific adventurer.

"The whole matter is very fully and lucidly discussed in my forthcoming volume upon the earth, which I may describe with all due modesty as one of the epoch-making books of the world's history." - Professor G. E. Challenger, When the World Screamed 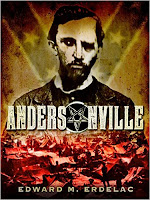 Readers of Stephen King and Joe Hill will devour this bold, terrifying new novel from Edward M. Erdelac. A mysterious man posing as a Union soldier risks everything to enter the Civil War’s deadliest prison—only to find a horror beyond human reckoning.

Georgia, 1864. Camp Sumter, aka Andersonville, has earned a reputation as an open sewer of sadistic cruelty and terror where death may come at any minute. But as the Union prisoners of war pray for escape, cursing the fate that spared them a quicker end, one man makes his way into the camp purposefully.

Barclay Lourdes has a mission—and a secret. But right now his objective is merely to survive the hellish camp. The slightest misstep summons the full fury of the autocratic commander, Captain Wirz, and the brutal Sergeant Turner. Meanwhile, a band of shiftless thieves and criminals known as the “Raiders” preys upon their fellow prisoners. Barclay soon finds that Andersonville is even less welcoming to a black man—especially when that man is not who he claims to be. Little does he imagine that he’s about to encounter supernatural terrors beyond his wildest dreams . . . or nightmares.