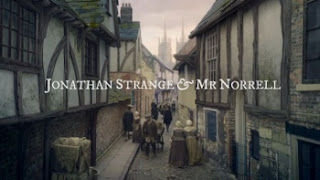 I've been talking non-stop for months now about BBC's adaptation of Susanna Clarke's Jonathan Strange & Mr Norrell and now the first episode is here. Not on TV, of course. Who uses such an antiquated device? If you don't have BBC America here in the States you can watch it instead on BBC America's YouTube channel.

The episode begins with John Segundus asking why magic isn't practiced anymore in England. After being laughed out of his club of "theoretical" magicians, he tracks down the person who has been buying up all of the books of magic in York. He meets Mr. Norrell who admits to being a practical magician, but the other "magicians" of York don't believe him. Demanding he prove himself, Mr. Norrell makes all of the statues in the York Minster come to life. After proving he can do magic, Mr. Norrell travels to London to offer his services toward the war effort against Napoleon, but he is blown off by the ministers until one of their number's wife dies and Mr. Norrell decides he may have found the right bit of magic to perform to change their minds...

Meanwhile, Jonathan Strange is madly in love Arabella, but she is not interested in marrying him until he finds a job (women, am I right?). Jonathan has no idea what he wants to do with his life and his father is a of little help since he is a mean, old man who thinks Jonathan is a complete screw up. Lucky for Jonathan, his father dies the next day. Jonathan, wasting no time grieving (and who would with a father like that), travels to see Arabella in hopes that now that he has inherited his father's estate, she would agree to marry him. On the way, however, he happens upon a street magician named Vinculus who claims Jonathan is one of two magicians prophesied to bring magic back to England...

Enough recapping, what did I think of Episode 1? Well I am happy it cut out a lot of the details of early 19th century English society and cut straight to the magic while still managing to hit all of the important plot points. It had a very Gothic atmosphere and I thought the casting of Enzo Cilenti as Childermass was near perfect, but I admit casting Vincent Franklin as Christopher Drawlight was less so. Vincent just seemed to be playing the character way too over the top for me.

The CGI wasn't great, but it made up for it with a couple jump scares early on. In fact I found the "the gentleman with thistle-down hair" to be quite creepy and came off more like a demon than a fairy...but then again, in some stories its hard to tell one from the other. Despite its dark tones, the show could be funny at times, although the humor was rather childish.

So all in all, not a bad first episode, but there is room for improvement. I have some time to wait before episode 2, but if you haven't watched it already I would go check out episode 1 as soon as you have the free time. Its entertaining and (more importantly) its free.