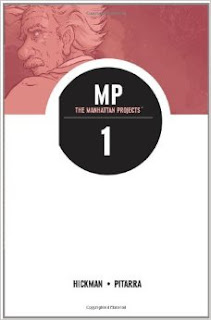 So I finished volume 1 of The Manhattan Projects and...what the hell did I just read?

Let's cut straight to the recap: Turns out the historical Manhattan Project and the atom bomb was just a front for the real science happening at the Manhattan Projects (the plural is important). All of the various scientists, soldiers and politicians of the era make appearances, but not as history remembers them as. For example, Robert Oppenheimer, the civilian head of the agency, is actually being impersonated by his twin brother, Joseph Oppenheimer, who killed and ate him to get his intelligence and is increasingly being controlled by his ever expanding network of multiple personalities...don't ask. You also have Leslie Groves, who is a religious zealot, Albert Einstein, who is also being impersonated by his more violent (but less intelligent) doppelganger from another timeline, Wernher von Braun, who has a robot arm, and Enrico Fermi, who is an alien pretending to be human (which I have to admit is rather clever).

I would talk about the story, but...I am not sure if there is one. A lot of stuff just happens, including uploading FDR's brain into a computer so it can form a shadow government over the United States. If there is a story I don't see it yet and the book just follows the adventures of a group of mad scientists as they slowly take over the world. It is weird, surreal and has a dark sense of humor. I also liked how they used the colors red and blue to delineate good and evil when they used flashbacks. That all being said, I can see why this isn't for everyone. It relies a lot of conspiracy theories/secret histories despite many calling The Manhattan Projects an alternate history. There are a lot of shocking developments that also don't add much to the experience besides being shocking.

Did I think it was good? Well...I finished the first volume rather quickly and I am curious about the second one. I am not sure if The Manhattan Projects is good, but I think I can say with some certainty that it wasn't bad. It was an curious piece of weird fiction and I am happy I read it, but this is certainly going to go down as an acquired taste.

Additionally, it was fun to see depictions of these famous people again in an alternate history. Perhaps the last time I personally saw any of these characters in one story together was in Turtledove's Worldwar series. In fact Groves was an important POV character for that story, but Hickman and Pitarra's take was certainly memorable, if frightening