I have no idea what my schedule is going to be like in the foreseeable future. My department at the firm lost some people and it happened at the start of the summer, which is historically the busy season for us. So we are all feeling the pinch as we figure out how to handle all this extra work with a smaller staff. Although I did get a tiny raise and title change, which helps, but it also means all of my other side projects are going to suffer.

I still haven't started revising "Warping History", I have no idea when I will record a new episode for my channel and I probably going to miss posting again for several more days. Please bear with me as I try to find a new equilibrium. Look on the bright side, at least I am posting on Memorial Day.

Due to the epic amount of news regarding BBC's Jonathan Strange & Mr Norrell and my desire to avoid spoilers, I once again created a special section in Links to the Multiverse for all of your magical news. I hope you guys enjoy it. 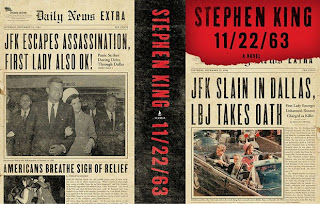 The title really says it all. T.R. Knight (Grey's Anatomy) will be playing Johnny Clayton in the alternate history mini-series based on Stephen King's 11/22/63. Johnny, a salesman in 1960s Texas, won't agree to divorce his estranged wife Sadie Dunhill (Sarah Gadon), even as she begins a relationship with time travelling Jake (James Franco), sparking a confrontation between the three characters.

For a book about saving JFK, Sadie's relationship with her disturbed and controlling husband highlights one of the important theme of 11/22/63: domestic abuse. Whether the show will treat the character and his relationship with Sadie the same remains to be seen. Its actually quite bizarre how certain news outlets are portraying the character. SPOILER ALERT: he is a crazy, abusive and sadistic asshole and if you read the book you would know that. Sadie describes to Jake how Johnny would make them sleep with a broom in between the bed and the only time they ever had any sexual intimacy was when Johnny would force her to give him a hand job. O yeah, when Johnny finds out Sadie is seeing Jake after she fled from him, he stalks her and then slashes her face with a knife.

And yet certain websites are describing Johnny's relationship with Sadie as just "complicated" and even going as far as describing him as a "romantic rival" to Jake. I don't usually swear on this blog, but what the holy fuck?!?! I am hoping that the writers of these articles just haven't read the book and thus in their ignorance have poorly interpreted the press release, but this eerily mimics certain characters in 11/22/63 who not only sympathized with Johnny's actions, but even went as far as to blame Sadie for the outcome because she was unable to control her man.

Again, I'm assuming the authors of the previously mentioned articles had the best intentions when they wrote about Knight joining the cast as Johnny, but I am starting to get a little worried about this show. I really hope that 11/22/63's producers don't water down the character to the point that the meaning behind him is completely lost.

After Jade Helm, Other Military-Takeover Operations Uncovered at The New Yorker.
Confirmed: Bin Laden was into conspiracy theories, including 9/11 conspiracy theories at Hot Air.
Dreaming a Different Apollo: Part Two at DSFP's Spaceflight History Blog.
Russian expansion: 'I went to bed in Georgia – and woke up in South Ossetia' at The Guardian.
Secret files reveal police feared that Trekkies could turn on society at The Telegraph.
So you think you can travel back in time and  kill Hitler at National Post.
This could be the official flag of Earth that we'll plant on Mars at Science Alert.