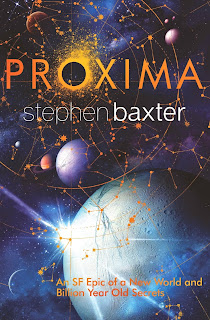 Before the Sideways in Time Conference began, there was a pre-conference social event where Stephen Baxter and Adam Roberts were going to talk about their new books at a local Liverpool book store. Wanting to get an autograph from Baxter, but not having brought any books I owned due to the desire to pack light on an international trip, I decided to buy a book there and the one I picked up was Proxima, the first book in the series of the same name.

Set in the 22nd Century, Proxima tells the story of humanity's first interstellar colony. In this future mankind is split primarily between the Chinese led "Framework" and a federalized United Nations. Most of the inner Solar System is colonized and the outer system is well on its way to being developed as well. There are references to the "Jolts", a period of intense climate change that almost destroyed humanity, but that was prevented by the actions of the "Heroic Generation". As noble as that generation's name sounds, their "ends justify the means" attitude meant that by the time the story takes place the leaders of that generation are reviled and even their descendants can suffer legal consequences for the actions of their ancestors. Baxter never goes into too much details about what the Heroic Generation actually did, but you get the sense that they cared little for how much organic and artificial intelligence suffered at the hands of their own projects to save the planet.

The story is told from multiple points of views (including a sentient interstellar probe made up of nano-bots), but the primary protagonists are Yuri Eden and Stef Kalinski. Yuri is actually a member of the Heroic Generation who was cryogenically frozen on Earth and later thawed out on Mars far into the future. Never fitting in the new society he found himself in, Yuri is made an involuntary member of the UN backed plan to colonize a new planet that the colonists will call "Per Ardua", an extrasolar planet near Earth. He, and many other undesirables that are dumped on the alien planet, are told to start reproducing quickly if they have any hope of surviving. Stef, meanwhile, is a scientist and only child who studies "kernels". These are strange materials found under the crust of Mercury that make interstellar travel possible. No one really understands how they work and, frankly, many suspect they may not be natural at all. This is confirmed when the "Hatch" is discovered on Mercury. After Stef goes in alone to investigate it, she comes out with a twin sister that everyone assures her has been around since they were born.

I found myself absorbed into the story of Proxima almost immediately. It is an intense space opera with a lot of historical references, such as how Per Ardua is originally colonized by convicts, much like how Australia and Georgia were colonized in our history. On top of that the book does have a subtle sense of humor with references to SF works like Doctor Who, Futurama, Dune, the works of Lovecraft and others works I probably missed. That all being said, the book can be depressing in a The Martian Chronicles-esque kind of way. There were a couple times I had to take a break from the book because it made me pessimistic about the future. I still recommend this book, however, because not every space opera needs to be like Guardians of the Galaxy to be good.

Of course, the big question is: why the hell am I talking about a space opera on an alternate history blog? Well that is because Proxima is actually an alternate history. Besides to mysterious edit to Stef's personal history, there is a moment of pure alternate history at the very end of the book, which I won't spoil since then I would have to give away the ending. The presence of an alternate history is much more evident so I hear in the sequel, Ultima, but since I haven't read it yet I can't really comment. Nevertheless, I do plan to pick up a copy soon and I hope you will join me as well.