What If World War I Ended With Germany's Unconditional Surrender? 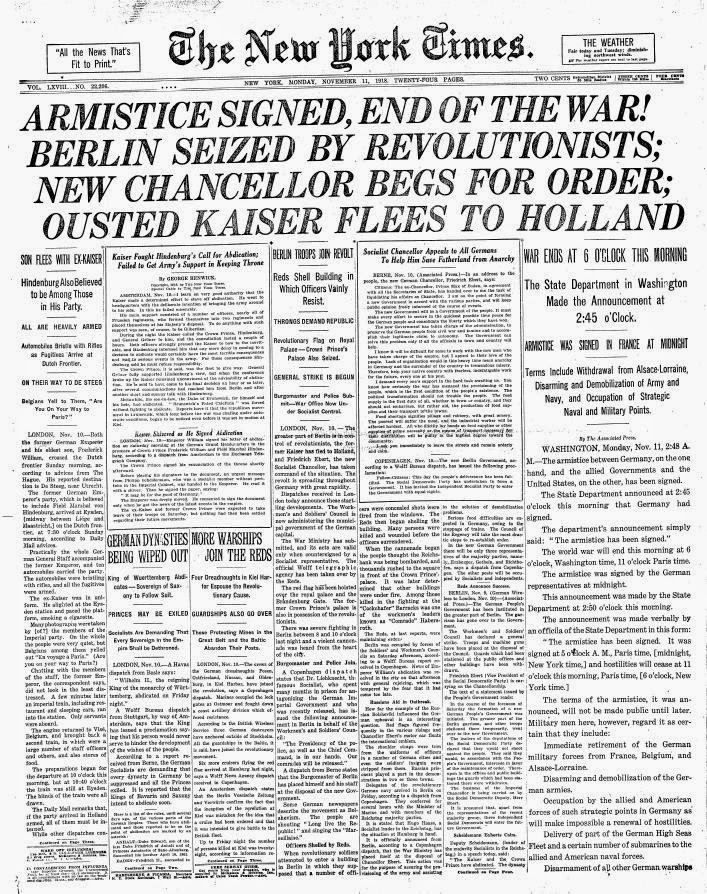 This week the world marked the anniversary of the First Armistice at Compiègne that ended hostilities on the Western Front in World War I on November 11, 1918. Many countries around the world mark this day as a holiday to honor their veterans in that war and all the others that have followed, but not everyone thinks the Armistice was a great idea. UKIP leader Nigel Farage went on record saying that the Allies should not have signed the Armistice and instead should have continued the war until Germany gave them their unconditional surrender. He argues that although it may have cost 100,000 lives, it would have prevented Hitler, World War II, the Holocaust, etc.

Before I continue, let me just say I don't subscribe to the UKIP's politics or ideas. With that out of the way, his idea is not exactly far-fetched. There was a lot of anger in Germany over the eventual peace settlement that put most of the blame of the war on that country. Hitler rode this anger to become the leader of Germany and without it he may have been less successful. Certainly this idea has appeared in alternate history before (see my article on alternate Allied victory timelines).

An optimistic scenario could involve either the Allies rejecting the peace offers (or the German Revolution failing thus the peace offer is never made) and taking the war all the way to Berlin (with the young Poland perhaps taking more bites out of Eastern Germany). Germany surrenders and the war weary Allies, influenced by the idealistic Woodrow Wilson, end the war with Germany with a fairer peace treaty and install a strong and stable democratic government. Feeling they were beat fair and square, the German people are not angry enough to vote for far-right parties like the Nazis who never rise out of fringe politics. Western investment helps rebuild the defeated Central Powers (and inadvertently prevent the Great Depression) and soon the former combatants mend relations (especially when the Soviet juggernaut begins to flex their muscles).

Not exactly the best case scenario, but it would avoid the worst horrors of the 20th century. Of course, a pessimistic scenario could be plausible as well. In his commentary on Farage's counterfactual, Gavriel D. Rosenfeld of The Counterfactual History Review argues that there is no guarantee the Allies wouldn't impose a harsh peace on Germany after 100,000 more dead soldiers return home. He even speculated that if the Allies were to occupy all of Germany we could see a larger insurgency fight them then what we saw after World War II.

Thus in his scenario we could see the war lasting longer as the Allies became involved in a drawn out occupation of Germany as they fought a general uprising of German citizens. The Allies may even split Germany into smaller states to prevent them from being a future threat, with some perhaps choosing right-wing, Hitler-esque leaders. With Germany divided and the Allies exhausted from war, an expansionist Soviet Union or Imperial Japan may think the time is right to strike, thus kicking off another global confrontation.

Which scenario do you think is more likely? Do you have one of your own? Let us know in the comments.