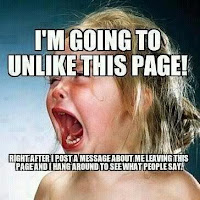 I talked about it during my guest appearance on Dissecting Worlds and the guys have alluded to it in later episodes. Essentially I consider alternate history, from the point of view of this blog, to be any speculative fiction that requires an appreciation of history to fully enjoy. That is why I feature steampunk, historical fantasy, time travel, parallel universes and other genres, even if actual allo-historical content is minimal. I do this because there are a lot of great things in this world and we alternate historians should not be narrow minded. I see it as this blog's mission to help spread awareness about books, films, television shows, games, etc. that we as alternate historians can enjoy.

With that mind, if you don't like the way I run my blog, then you don't have to read it. Just don't be like the guy who left this message on the "Alternate History" Facebook page. If you want to leave, fine. Just don't be a troll and post a passive aggressive message before leaving. I still appreciate feedback, but I assume people who give constructive criticism are going to stay and see what happens.

By the way, this is my first week at my new job so once again I request that you be patient as I get used to my new routine. As I said before I am taking a lot of time off in December so it will next month where we find out if I can balance my new jobs and the Update.

Two trailers you guys might be interested in. First the trailer for Assassin's Creed III: The Tyranny of King Washington DLC:
I have talked about this DLC before and the plausibility of Washington as king, yet I have to admit the "evil" Washington and his guards do look cool. It will be interesting to see what the storyline is behind this alternate history and what events caused America's first president to go bad.

And then we have After Earth:
This is first trailer for M. Night Shyamalan’s SF adventure. Here is the synopsis from SciFiNow:

One thousand years after cataclysmic events forced humanity’s escape from Earth, Nova Prime has become mankind’s new home. Legendary General Cypher Raige (Will Smith) returns from an extended tour of duty to his estranged family, ready to be a father to his 13-year-old son, Kitai (Jaden Smith). When an asteroid storm damages Cypher and Kitai’s craft, they crash-land on a now unfamiliar and dangerous Earth. As his father lies dying in the cockpit, Kitai must trek across the hostile terrain to recover their rescue beacon. His whole life, Kitai has wanted nothing more than to be a soldier like his father. Today, he gets his chance.

I talked about this film last July, so if you are wondering why I am showing this trailer on the Update, go click the link. 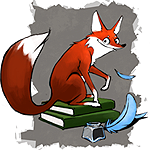 More chances to get published and more writing tips for those aspiring authors out there.

First up are the opportunities to get published. Here is a better link for the Horrific Histories anthology I posted about last week and the submission guidelines for Wily Writers Audible Fiction. If you ever wanted to hear your work published in audio format, you might want to check these guys out.

For those authors actually looking to write an alternate history, check out Present day, alternate world, different rules by Alison Morton (author of Sample Something a Little Alternative) where she discusses the importance of research and accuracy. For more general advice read Top Ten Tips for People Thinking about Writing a Book by Guy Kawasaki and, if you already have a finished manuscript, The Five Mistakes Killing Self-Published Authors by Kristen Lamb.

With a new year coming there are already a slew of conventions and events planned for 2013.

Boskone 50, NESFA's regional science fiction convention, will be held on February 15-17 in Framingham, MA. You might even see some of the people behind Amazing Stories there. Meanwhile, for those steampunk fanatics out there, we have the Wild Wild West Steampunk Convention on March 8-10 in Old Tucson, AZ and the music festival Steamstock on July 27-28 in San Francisco, CA. Check out there Kickstarter if you are interested in contributing.

This just in from LoneStarCon 3, the 71st World Science Fiction Convention, rates will increase from January 1, 2013. So if you are going to see the Sidewise Awards get presented next year, make sure you bring enough cash.

The Merchant of Dreams by Anne Lyle
When Mal’s dream about a skrayling shipwreck in the Mediterranean proves reality, it sets him on a path to the beautiful, treacherous city of Venice – and a conflict of loyalties that will place him and his friends in greater danger than ever.

Black Sun Reich: The Spear of Destiny by Trey Garrison
The first novel in a new steampunk, horror, alternate history, action-adventure series set in a 1920s where the Nazis have begun their subjugation of the world using the occult, advanced science, and a holy relic with awesome powers.

Generation Null by Wendi K. Bennett
Whenever your time machine begins to smell like this, you know you are in trouble.

Time Samplers #1 - Escape from Jekyll Island by Thomas Gorence, David Pinckney, and Erik Koconis, with art by Nicolas Colacitti
Two musicians investigate historical conspiracy theories through psychedelic time travel. Check out my review of the comic and stay tuned for my upcoming interview with one of the creators of the comic.

Alternative History and Inciting Incidents by Ray Dean at Steamed!

The Birth of a New Steampunk by Austin Sirkin at Steampunk R&D.

Laika, An Alternate History by Miss Cellania at Neatorama.

The Seattle That Could Have Been: Now At MOHAI by Knute Berger at Seattle Magazine.

There’s a Little Real History in my Alternate History #4 by M. Fenn.

Tetsuo wins and Gotham lies in ashes in Alternate Ending art by Lauren Davis at io9.

Why Chinese Needs Post-Apocalyptic Steam Punk (with Dinosaurs) by John at Sinosplice.

Review of 1945 by Newt Gingrinch and William R Forstchen at The Indefinite Emu.

Review of Agatha H and the Clockwork Princess by Phil and Kaja Foglio at Travels Through Iest.

Review of The Janus Affair by Pip Ballantine and Tee Morris at Fantasy Book Review.

Review of The Royal Sorceress by Chris Nuttall at The World According to Quinn.

Review of Salvage and Demolition by Tim Powers at Thinking about books.

The Steampunk Gotham Comic From Sean Gordon Murphy That Wasn’t by Rich Johnston at Bleeding Cool.

The Best Steampunk Games (Then and Now) by Patrick Hyland at Star Pulse.

Steampunk fantasy game Edge of Twilight back in production after three year hiatus by Naren Hooson at VG 24/7.