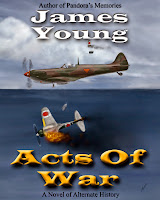 In bowling, three consecutive strikes is known as a “turkey.”  While the origins of this phrase are up for some debate, many a professional or amateur bowler has lamented at the opportunity lost as their third consecutive throw either arcs too far into a gutter, just barely misses the sweet spot at the head of the pins, or is subjected to one last lone, wobbling 7 or 10 pin preventing the strike.  In the same manner that countless bowling alleys have been filled with such tales about the strike that got away, Vice Admiral Chuichi Nagumo and the Kido Butai’s failure to launch a third strike on 7 December 1941 has been subject to much spilled ink and spoken word.  Most of this discussion, in turn, focuses on the untouched above ground fuel tanks, submarine base, machine shops, and drydocks that formed the United States Navy Pacific Fleet’s backbone and support structure.  Although in the original time line (OTL) Mitsuo Fuchida is the only primary source that indicates a third strike was even considered contemporaneously, this myth has gained such traction  that it has almost achieved trope status among alternate historians. Therefore, this article will serve as a guide for the alternate historian with regards to the pitfalls that surround having a Point of Deviation (POD) centred on Nagumo’s force launching a final attack on 7 December.[1]

The first major issue that an author must attend to is doctrinal.  The Imperial Japanese Navy, as described in books such as Kaigun and Sunburst, was primarily a force oriented entity.  This meant that the Kido Butai’s function was the destruction of enemy naval assets, followed grudgingly by enemy air forces, then as a distant third enemy infrastructure (Evans and Peattie, 464-482 and Peattie, 138-153).  This can be seen in Chuichi Nagumo’s primary mission being the destruction of the United States Navy’s (USN’s) battleline with, despite the claim of some postwar historians, the destruction of the carriers being seen by Admirals Nagano and Yamamoto as a useful corollary to this goal.  From this tactical and operational perspective, the initial two waves must have seemed a wild success.   With two battleships (Arizona and Oklahoma) definitely destroyed, one (Nevada) clearly beached, another (West Virginia) heavily damaged, the California with two torpedo hits, and the remaining three battlewagons either trapped by their fellows in flaming oil or in dry dock with two furiously burning destroyers, Nagumo’s battle damage assessment (BDA) surely argued that he had achieved overwhelming success and it was time to run, not walk, from the gambling table (Wilmott, 142-157).

Defeating such a mindset would not an easy matter, but three possible solutions present themselves.  First, an alternate historian can lessen the severity of the storm that delayed the U.S.S. Enterprise’s return to Pearl Harbor.  It is possible that the sighting of one of the Pacific Fleet’s three flight decks by the Kido Butai’s second strike after the IJNAF aircraft had already expended their ordnance may have elicited even the recalcitrant Nagumo to return for “just one more hand.”  Similarly, if an author makes the Arizona’s bomb a dud or has the torpedo modifications not work as well as they did historically, much of the first and second wave’s clearly visible success would have been lessened.  Finally, the Pacific Fleet having a true wartime mindset and reacting with greater alacrity to the U.S.S. Ward’s 0635 encounter with a Japanese midget submarine would have greatly lessened the first attack’s effectiveness.  Had the first wave found itself attacking battleships in Condition Zed with steam up even without more active measures being taken, it is unlikely that the Kido Butai’s aviators would have enjoyed the wild success of their first attack.  In any of these situations, Vice Admiral Nagumo would be far more likely to authorize a third strike in order to fulfill his orders.

The defenses such a strike would face are the second major hurdle to the idea of a third wave.  When discussing the attack, many general wartime histories remark on the relatively light Japanese losses of only 29 planes.  What most of these works ignore in reporting this paltry number is the high number of damaged aircraft that returned to the Japanese carrier decks from both waves. (Wilmott)  Even with the introduction of the VT fuse over a year away, the USN’s 5” gun was a very effective anti-aircraft weapon with a relatively large effective radius against the lightly built Zero, Val, and Kate.  Furthermore, while not nearly as devastating as later light anti-aircraft artillery arrays would be, those 20mm, 1.1-inch, and machine guns that did get into action on 7 December managed to land significant blows against IJNAF aircraft.  Given that the photograph below was taken in the midst of the second wave, it is not hard to imagine the ferocious anti-aircraft fire a third wave would have faced: 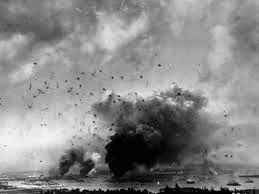 With AA of this magnitude or greater, the alternate historian must understand that the third wave’s accuracy will be slightly to moderately degraded based on historical evidence.  In addition, U.S. Army interceptors that managed to get airborne on 7 December established a kill ratio of over 2:1 in the OTL, albeit preying mainly on egressing (rather than ingressing) Japanese Vals and Kates.  Although it is unlikely that such success would be replicated against a cohesive strike, balancing this is the likelihood that radar reports from the Army’s outpost would likely be acted upon after the events of early morning.  With the advantage of having time to gain altitude, the Army (and what Navy / USMC fighters could be scraped together) would likely give a decent account of themselves (Zimm, 267-288).

Even assuming an optimal (no key leaders killed, formation integrity relatively maintained) passage through the American defenses, a third wave would have to both acquire and apply proper ordnance to the desired infrastructure targets.  In the case of the machine shops and heavy equipment, experiences from the United States’ bombing campaign in Europe indicate that the Vals’ 250-kilogram high explosive bombs were of limited utility even when striking nearly directly on major industrial machinery.  Although the Kate level bombers carried a heavier bomb load, it is unlikely that the modified 16-inch shells from Nagato and Mutsu could be delivered with sufficient accuracy or, based on their historical dud rate, reliability to truly have a long-term deleterious effect.  Although the 1,760-lb. high explosive weapons also carried by the Kido Butai were more reliable, a third wave would have carried only 30-45 of these weapons before losses.  Such a low number means that an alternate historian can realistically destroy only one of either the machine shops, dry docks, or the submarine facilities or moderately damage two of these facilities.  While the above ground fuel tanks would be much more vulnerable than the heavy machine tools, as show from Ploesti to Midway such facilities were relatively easy to replace.  In short, an author will have to decide what 6-8 month effects he or she is attempting to generate, then be judicious in their choice of targets.

None of the above should be taken to mean that a third strike is improbable or a fool’s errand. Although, as noted above, the historiographical evidence that such a course of action was even considered is slim, numerous authors have employed some variation thereof.  In Pearl Harbor (2007) and Days of Infamy (2008), the duo of Newt Gingrich and William Fortschen overcame these issues by first putting Admiral Yamamoto in direct command of the Kido Butai and, echoing the OTL’s Guadalcanal campaign, dispatching the battleships Hiei and Kirishima to conduct a night bombardment against Pearl Harbor’s facilities.  Harry Turtledove, in his own Days of Infamy (2005) and The End of the Beginning (2006) duology had the Pearl Harbor strike as the opening gambit in a Japanese seizure of the Hawaiian Islands.  While none of these solutions are optimal, they are unique, intriguing, and successful ways in solving the doctrinal and tactical issues with a Pearl Harbor attack.  Aspiring alternate historians should take note and blaze their own path in helping Chuichi Nagumo put his third ball in exactly the right spot.

Parshall, Jonathan.  “Reflection on Fuchida, or ‘A Tale of Three Whoppers.’”

Parshall, Jonathan and Anthony Tully.  Shattered Sword: The Untold Story of the Battle of Midway.

Snow, Carl.  “Japanese Carrier Operations: How Did They Do It.”

[1]: Or put another way, this article is written with the assumption that a third strike on 7-8 December is feasible and thus assumes multiple factors break the Kido Butai’s way.  See Wilmott, 142-157 and Zimm for just two well-written examples of why this was unlikely.

James Young is the author of the upcoming alternate history novel Acts of War in which his own solution to helping find Nagumo’s “missing turkey” is to kill off Adolf Hitler in 1940, drastically change the Pacific War’s strategic calculus, and promote Tamon Yamuguchi to Vice Admiral and place him in charge of the Kido Butai.  While that may seem akin to building a whole new bowling alley to get the job done, the end result is well worth the trouble.
Posted by Mitro at 11:00 AM