Review: Curse of the Crimson Corsair by Len Wein and John Higgins 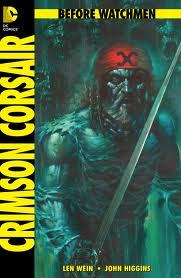 In the Watchmen universe, comics don’t star superheroes, not when you've got costumed vigilantes patrolling the streets. No, instead, they star spacemen, heroes, and other pulp trends, the most recent one being pirates – one such pirate comic, Tales of the Black Freighter, made passing appearances throughout Watchmen, and to pay homage to that, another such pirate title was tacked on to a number of the Before Watchmen issues, a tale of the Curse of the Crimson Corsair. So is it worth your pieces of eight?

Sailor Gordon McClachlan has had a rough time on his first voyage – driven to mutiny by a captain fond of keelhauling his sailors, and only saved from the noose by a Spanish warship that sank his own, he lies adrift for days before being rescued by the one ship no sailor ever hopes to see – the Flying Dutchmen, captained by the Crimson Corsair. The Captain makes clear the cost of his rescue is a steep one – his soul and a lifetime of service aboard the Dutchmen – and the cost of winning back his soul and freedom may be even steeper. What horrors must McClachlan face to win them back? What horrors must he commit? By tales end, he may not have much of a soul left to win back…

The art style is fantastic, helped along by writing that matches the pulpy pirate tale being told. It reads like an old adventure serial, one that leaves you longing for each installment.

If there is one complaint to be had, it’s that this title seems to have been one such victim of the behind the scenes drama at DC Comics concerning the Before Watchmen titles – it cuts off far earlier than it was planned, resulting in a rushed ending that seeks to provide some closure. It’s a real shame given this was up until that point one of the highlights of Before Watchmen.

So in the end, is it worth a look? Absolutely – even if it doesn't sound like your kind of thing, it’s free to read on DC Comic’s website. Go take a look, see for yourself – it makes a fine barometer for Before Watchmen as a whole, with this being a middle of the road offering from the entire line.